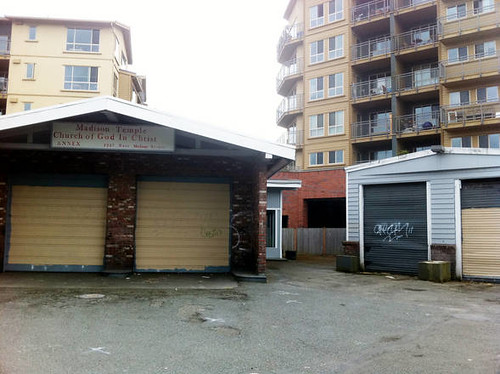 Madison Temple Church of God in Christ began renting the space at the corner of 23rd Ave and E Madison St in 1930. Seven years later, the church purchased it for $2,500.

Now, they are looking to expand next door, turning a former auto shop into a muti-purpose community space.

Back in the day, the building at 2227 E Madison St, next door to Madison Temple, was a Texaco fueling station. Then it became an auto detail shop. The church purchased the property from the mortgage company in 2009, extending their property from the corner to the Safeway building next door.

With a development planned across the street at 2200 E Madison, Gray said the church is looking to do more than just clean up the graffiti and change drab colors. They plan to fix up the larger annex space into a multi-purpose programming space. The garage doors will be replaced with windows and and door, he said. The smaller building will be cleaned up and used for storage.

Across the street, the development that will create a 6-story assisted living facility is taking shape as the project goes through the city’s design review process and moves toward the start of construction. It’s a busy area — CHS has also learned about a significant overhaul being planned for the 23rd/Madison Safeway. Details on that soon.

Meanwhile, at the site of the planned community space, inspectors checked the property for contamination left over from the Texaco station and gave it a clean bill. The church has the permits needed to do the work and is in the process of finding a contractor. Pastor Gray said he hopes most of the work will be finished by the end of the year just as the digging is planned to start across the street.

This post was also published on Capitol Hill Seattle.