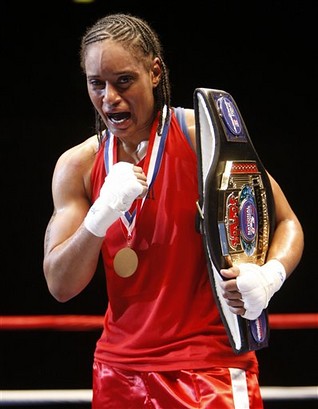 The Queen of the Ring is in Colorado fighting to win her fifth national championship in a row, and she is already making headlines.

“Powerful Queen a knockout machine at boxing nationals” from The Gazette in Colorado Springs is one my favorites. And it’s true.

The Queen stopped (the amateur boxing version of a knockout) her first opponent Maria Madrigal in the first round. She then stopped Darina Mims in the third round. With two big wins under her belt, she faced off against another four-time national champion, Caroline Berry.

The Denver Post built up to the match in a story where they referred to Underwood as ” a women’s boxer named out of central casting.” Berry has a military background and has been training hard:

Barry is on the base six days a week, slipping up to Boulder for the seventh. Her intense workouts are Monday-Friday, beginning with 6 a.m. strength and conditioning at the Olympic Training Center.

Then she hops over to the Air Force Academy for vision and reactionary training, as well as hyperbolic intervals, where they control the climate to sea level and she will run treadmill intervals. She’ll sneak in a shower and lunch, then meet Coach Abdullah in the afternoon for boxing sessions — and sometimes at night too.

But who needs an Olympic Training Center when you’ve got Cappy’s at 22nd and Union? (see our previous story) Not the Queen. Here’s how she responded in the same article:

The person perhaps in her way will be standing right in front of her today. The 5-6 Underwood is an audaciously aggressive boxer. The two will box today at the Colorado Springs Christian School in the quarterfinals — and the winner will advance to the semifinals and become one of the four automatic qualifiers for the Olympic Trials.

Underwood, who hails from Seattle, won Tuesday with a third-round stoppage, which is the amateur equivalent of a knockout.

“I’m ringing bells out here,” Underwood said. “That’s what I’ve been working on a lot — getting a hold of my power and trying to take people out.”

She is scheduled to take on N’yteeyah Sherman from Ohio today in the semifinals.