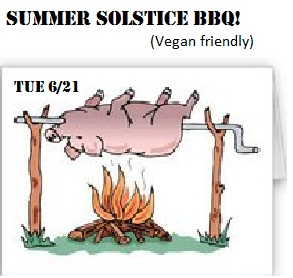 The night of the summer 2011 solstice, Autonomia — “a radical social space in Seattle” — hosts a vegan friendly barbecue at its home at the corner of 24th Ave S and S Lane. SeattleCrime reports that city zoning laws might shut the “anarchist hangout” down:

Neighbors say Autonomia opened in mid-March, and since then DPD has received two separate complaints about the venue, claiming a “non-profit anarchist group” is “operating as a ‘night club’ on weekends, in the middle of a residential neighborhood,” and advertising events on its website.

Police have previously responded to complaints about large parties at the venue. Police records indicate officers were called to Autonomia shortly before 11:30 p.m. on April 16th after neighbors called to report loud music and a “disturbance involving 20-60 juveniles.”

When police arrived at Autonomia, a man inside blocked officers from entering the facility.

According to the DPD notice on the complaint, Autonomia has until July 22 to comply with a ruling that it is in violation of the city’s land use code. The property is permitted only to be utilized for apartments or a market — any other use such as a nightclub, meeting hall or performance space would require a change of use approval from the city. SeattleCrime reports that the property owners will face fines if they don’t comply by next month’s deadline and that the situation would be passed to the City Attorney if it isn’t resolved through compliance by Autonomia.

According to King County records, the 1901 building is owned by Girma Tefera.

According to its website, Autonomia is an attempt to “create radical infrastructure in Seattle:”

Autonomia is a volunteer-run, not-for-profit social center in the Central District of Seattle. The space is managed collectively, and all decisions are made by group consensus. We strive to create a space that embodies the principles of equality, anti-oppression, and social justice, and we wish to empower the Seattle grassroots community by giving it access to a public space for community organizing. The Autonomia collective aims to support the diverse multitude of anti-authoritarian and working-class struggles in the Seattle area and around the world. We believe that a well-organized community is able to solve its own problems and better meet the needs of its community members when it practices group decision making and direct democracy.
Autonomia offers:
-Free coffee
-Free literature
-Free computer and internet access
-Free clothes
-A space for artists to showcase their work
-A space for grassroots organizations to meet
-Events such as benefit concerts, film screenings, open-mics, workshops, and Seattle Free School classes

Autonomia Social Center is an example of creating radical infrastructure in the Seattle community. It’s a place to meet comrades in struggle, a place for educating yourself and others, a place to hang out, laugh, eat, inspire and conspire together. As a result of Seattle’s passionate struggle against oppression in the last few months, many are looking at radicals and asking “Well if not capitalism, if not police, if not hierarchy, exploitation, and environmental degradation, then what?” Autonomia strives to offer answers, to create a microcosm of alternatives to oppression as we tear this macrocosm of injustice down, to serve as a reminder of what we are for while we fight the relentless oppression of the state we are so passionately against.

The city’s change of use process is cumbersome but not impossible to navigate. The recent case of Volunteer Park Cafe’s efforts to secure a change of use permit in the Capitol Hill neighborhood, though, shows that it is extremely expensive and dependent on good relationships with neighbors. On the other hand, it can also be a lengthy process that takes months to play out.

We’ll ask the people behind Autonomia what their plan is. Should they decide to give the city bureaucracy a spin and apply for a change of use for the space, it will be interesting to see if a “radical” group like Autonomia can work it out and stay in the Central District.