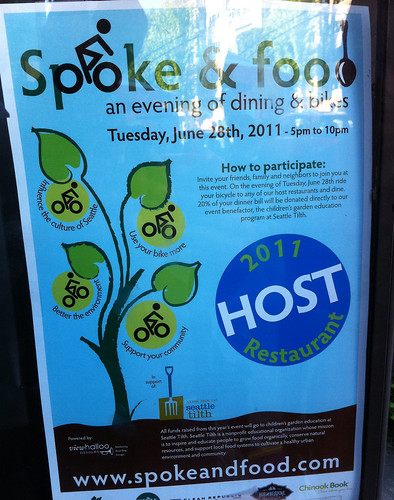 If you would like to eat delicious food and support garden education for children in Seattle, all you have to do is ride a bicycle to Madrona Eatery and Alehouse June 28 and buy dinner. The Alehouse is one of 13 restaurants participating in this year’s Spoke & Food, a fundraiser event in its second year that aims to encourage bicycling and raise money for local non-profits (among other goals).

Participating restaurants will donate 20 percent of all dinner bills collected between 5 and 10 p.m.

More details about Spoke and Food, from organizers Garett and Heather Slettebak:

Seattle’s second annual Spoke & Food event will happen on Tuesday, June 28th. Billed as “an evening of dining and bikes”, the event will take place in 13+ different Seattle area neighborhoods. The event asks people to bicycle to (and from) one of the “host” restaurants on the night of the event. This community event was launched last year as a way to influence the culture of Seattle, to show how easy and fun bicycling to and from dinner is and to raise money for a well-deserving Seattle area non-profit. A new non-profit beneficiary is selected each year. This year’s event will benefit the Children’s Garden Education program at Seattle Tilth where as last year’s event benefited the Lettuce Link program at Solid Ground.The funds raised for the non-profit are donated directly to the non-profit by each of the “host” restaurants who have agreed to give 20% of all the diner bills collected between 5:00pm and 10:00pm on Tuesday, June 28

th. In return of their gracious support, the Spoke & Food event will have only one host restaurant in each of the neighborhoods that are involved.