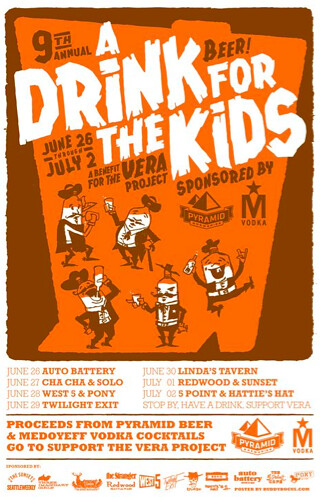 The least you can do for Seattle youth is have a drink for them.

Twilight Exit (a CDN sponsor) is hosting A Drink for the Kids tonight (June 29) from 6 p.m. to close. Proceeds from Pyramid beers and Medeyeff vodka will go to support the Vera Project, the much-needed all-ages music venue at Seattle Center.

Raging in the Central District with your hosts Josh Powell, Travis Maisch, and Rahwa Habte! We’re so going to party at this one, last year a round of shots was bought for the entire bar!

Speaking of all-ages music venues, the CD’s own Hollow Earth Radio is hosting their monthly all-ages dance party and art show at their 22nd and Union studio. The world can listen online, but people in the area can attend in person.

OC Notes’ monthly all-ages art and dance party session, “The Art Show” goes down live in the Hollow Earth Radio studio and streams worldwide at http://www.hollowearthradi o.org/ . Catch it live in the studio at 9pm (sharp!), or set your internet equipment accordingly.

This edition will feature the scintillating essence of CHOCOLATE CHUCK and temporal inversions of SWAMPMAN as well as special guests, hijinks, and surprises beyond description.