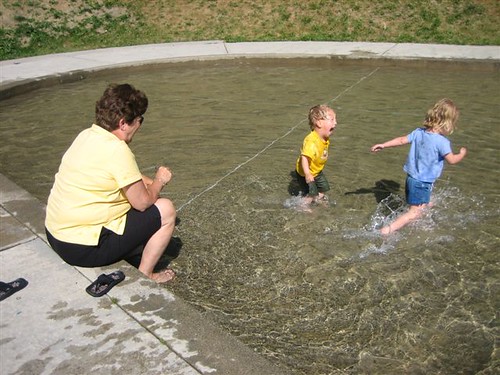 The people of the Central District have spoken: We refuse to have dry ankles this summer.

It was down to the wire yesterday. At noon, only five hours before the fundraising deadline, organizers of an effort to keep Powell Barnett Wading Pool open Saturdays this summer still needed $1,800. Then, someone who wishes to remain anonymous offered organizers a $1,200 loan to help meet the immediate goal. After the loan put the pool’s goal within striking range, the donations started to pour in.

Central District News and our sister site Capitol Hill Seattle donated $300 to cut the balance in half. But it was not large donations that kept the pool open, it was 60 people, most donating under $50 each.

After the dust settled, the count shows about $3,500 raised total, about $1,200 of that raised in the last week. That means they not only met the fundraising goal, but the group only needs to take $900 of the offered $1,200 loan.

The effort to raise the funds for the pool came after city budget cuts forced the pool and many other Seattle wading pools to be closed. The group worked out a deal with the Parks Department to allow them to raise money for a limited schedule of eight Saturdays from July 2 to August 20 instead of the $13,200 required to keep the pool open on a full 24-day schedule. Under the reworked deal, the group only needed to raise $4,400.

There will likely be some more fundraisers this summer. There are talks about something happening at All-Purpose Pizza at Jackson and 29th Ave S. Stay tuned for more.

0 thoughts on “Thanks to community donations, Powell Barnett Wading Pool will be open this summer”