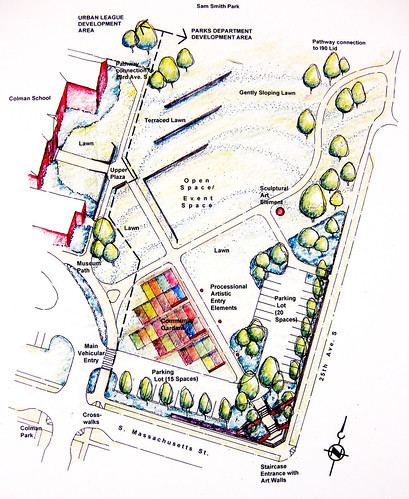 The Friends of Jimi Hendrix Park have selected a design team for the park at 24th Ave S and S Massachusetts St. During the spring and summer, the team will conduct a series of public meetings. The first meeting is scheduled for 6:30 p.m. May 17 at the Northwest African American Museum.

The Friends of Jimi Hendrix Park recently announced the selection of a design team to distill ideas from the community and the legacy of rock legend Jimi Hendrix into a vision for development of the Central District Park that bears his name.

Murase Associates was chosen from among 11 applicants to lead a public engagement process and envision landscape and structural elements that will transform a swath of turf adjacent to the Northwest African American Museum into a living tribute to the musical genius of Seattle native Jimi Hendrix.

“I was most impressed with the passion for this project expressed in Murase’s application and presentation, as well as their commitment to creativity, innovation and community involvement,” said Janie Hendrix, the CEO/President of Experience Hendrix L.L.C., the family owned and operated company and founder of the Jimi Hendrix Park Foundation.

The park has already secured hundreds of thousands of dollars in funding, including $500,000 from the Parks and Green Space 2008 Levy Opportunity Fund, $70,000 from a Neighborhood Matching Fund and a $20,000 donation from Janie L. Hendrix. The estimated cost for the project is $2 million, according to their website.