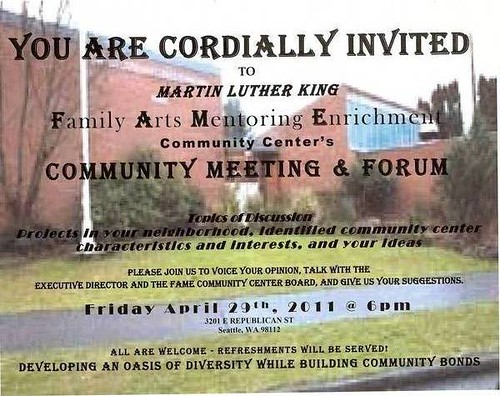 First AME is holding a public meeting and forum Friday, April 29 beginning at 6 p.m. at the site of the old MLK Elementary building, which the organization purchased from the Seattle School District late last year for $2.4 million.

The public is invited to the Martin Luther King Family Arts Mentoring Enrichment Community Center at 32nd and Republican in Madison Valley to “discuss projects in your neighborhood, identified community center characteristics and interests, and your ideas,” according to the event flier. Attendees will have a chance to meet the executive director and FAME Community Center Board.

“We’re going to talk briefly to the community about what we had submitted and get from them what they would like to see in terms of the community center,” said Norward Brooks from First AME, who described the event as a meet-and-greet. “I hope that we can get more of the community involved in having the center operate because it is a center for the people in that community.”

The First AME bid for the school was the lowest of the three competing offers the school board received for the school, but the district determined that the organization’s planned programs and low space rental rates offered the highest value to the community.

The Seattle School District financial scandal that broke earlier this year put the MLK Elementary deal back in the news after allegations arose that FAME member Fred Stephens — who supervised Silas Potter, the man accused of wasting $1.8 million in district funds — helped his church win the bid. School Board Member Michael DeBell told Seattle Weekly that Stephens’ connection to the church was disclosed and that he did not play a role in board’s decision.

FAME has posted a “Statement of Facts” regarding the sale of the school property on their website.