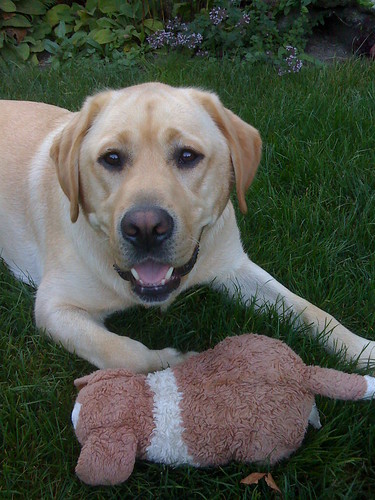 An electrified metal plate on the sidewalk gave Hank quite a shock early this morning. Hank, an 85-pound yellow lab, was on a walk with his owner on 32nd between Atlantic and Massachusetts when Hank stepped on a metal plate on the sidewalk next to a light pole. He then “let out a pretty good squawk” and straightened up, said Alex Maas, whose wife had been walking Hank at the time. Hank limped for a little bit after the shock, but he walked it off and is doing fine.

After his wife told him what happened, Maas grabbed a voltage meter and went to the spot to test the metal plate. After he got a reading (the needle on his cheap meter was “all over the place,” he said), he went searching for a hotline number to call to report the problem. He logged onto CDN to find a post he remembered seeing a couple weeks ago about an electrified pole discovered at 23rd and Marion. After calling the hotline and reporting the problem to Seattle City Light, he left a comment on the story.

“I remember when the woman’s dog got electrocuted on Thanksgiving,” he said, in reference to the tragic death of Sammy in Queen Anne. After that incident, City Light began testing all their light poles, finding five electrified poles in the Central District.

However, Suzanne Hartman with City Light said they do not believe this incident is due to the same issue as the previous electrified poles. This light pole is concrete, she said, and in this case the electrical equipment under the panel may have been damaged during construction in the area.

“We’re trying to figure that out now,” she said. They have turned off the energy to the panel. City Light will publish an update on their website soon, she said.

Since inspecting the poles in January, the pole at 23rd and Marion is the only electrified one City Light has found. That pole was damaged by a car last year and was not reinstalled until after the January inspection, thus getting skipped by the check. City Light has since checked all the poles installed since the January inspection, said Hartman.

City Light responded to Maas’ call very quickly, said Maas, and he is pleased with how they reacted to his report.

“City Light was awesome,” he said. They went out quickly to assess the issue and gave him a call back to update him on the situation and ask how Hank was doing.

It’s a good thing Hank is a big, solid five-year-old who was able to walk off the shock, said Maas.

“Who knows, with a little dog, it might have been a different story.”

UPDATE: City Light posted more details on their blog. It appears a bolt was missing from the plate. They checked similar street lamps in the area and did not find any more issues:

The metal plate is about 3 inches wide by 5 inches tall and covers the wiring for the pole. A repair crew measured 109 volts of electricity on the plate and repaired the equipment immediately.

City Light continues to investigate the cause of the voltage. It appears there has been recent construction near the pole and a bolt was missing from the plate.

Since this was a concrete pole, there was no voltage in the pole itself. There are 15 similar poles in the surrounding neighborhood. City Light checked all of them and found no other incidents of contact voltage. Crews also will check 60 other similar poles in City Light’s service territory as a precaution.