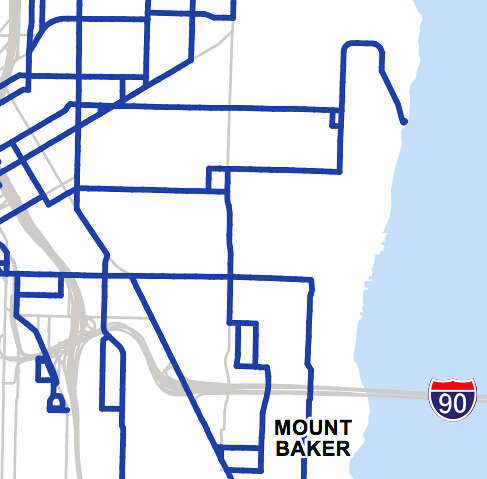 People who live near electric trolley bus lines can breathe a little easier. Initial findings from a King County Metro study comparing the costs and benefits of replacing the agency’s aging trolley bus fleet lean heavily in favor of staying electric. In fact, a trolley fleet beats out a diesel hybrid fleet in nearly every way, from cost to environmental impact to quality of life.

“Electric trolley buses perform better on steep grades, are quieter, have lower greenhouse gas emissions and consume less energy on a yearly basis,” according to the initial findings report published by King County Metro as part of their Trolley Bus System Evaluation.

The majority of bus routes in the Central District are trolley buses, and CDN and our sister site Capitol Hill Seattle have been watching the replacement debate closely. A not-so scientific online poll conducted by CHS in June showed wide support for trolley buses.

There will be a public meeting April 27, and public comments on the findings are due by May 6. The report will inform Metro’s budget this summer, which will go to the King County Council for approval in November. If all goes smoothly, the new trolley buses could start rolling out in 2014. You can send feedback on the report to Project Manager Christina O’Claire [email protected].

Due to Seattle City Light’s heavy use of power sources that emit little CO2, such as hydroelectric, a diesel hybrid replacement would emit nearly 22 times as much CO2 as a trolly bus replacement. Aside from carbon emissions, the trolley buses use less energy in general.

The trolley buses are also more cost-effective, according to the report. Though they cost more per bus than diesel hybrids, their lifespans are estimated to be three years longer than their diesel counterparts (15 years vs 12). After factoring in energy savings and federal grants, the annual operating costs for a trolley system would be several million dollars less. As Central District News pointed out, the operating costs of the diesel fleet are heavily dependent on unpredictable fuel prices.

In a weighing of the pros and cons for each technology, electric trolley buses beat out or tied hybrids in every criteria from noise to air quality to “neighborhood character.” The only criteria in favor of diesel hybrid buses is “visual quality,” due to the removal of overhead trolley wires.

The trolley buses that run on Central District routes #2, #3, #4, and #14 have relatively new bodies that were purchased in 2002. However, in a cost-saving move, the county bought them without motors and simply recycled the 1970s-era propulsion systems from the old trolley buses that they replaced. The other part of the trolley bus fleet is composed of the Breda articulated buses that run on busy routes like the #7 and #43. Those were purchased in the late 80s to run in the downtown bus tunnel, and originally had diesel engines that would run out on the streets and then switch to electric motors once inside the tunnel. But Metro began running new diesel hybrid buses in the tunnel in 2004, and began to switch the old Breda buses to trolley-only routes. The diesel engines were removed and they became electric-only.

Here is the initial findings report: