After its drubbing of Puyallup, Garfield is looking like the team to beat in the 4A state boys basketball championship tourney, the Seattle Times says:

After failing to advance to the Tacoma Dome in 2010, the top-ranked Bulldogs, who took second in 2009, channeled their excitement into an up-tempo game that produced a 90-80 victory over No. 10 Puyallup in the quarterfinals Thursday. 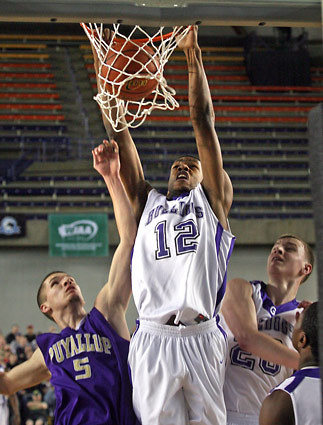 “It was good on the energy side, but it was bad, because sometimes the energy gets going a little too hard,” Haskins said. “They settled down. They played and we got stops and makes (on the other end) and that’s really what a championship is all about, stops and makes.”

Garfield (23-3) plays Gonzaga Prep in the semifinals at 5:30 p.m. Friday, while Puyallup plays Kentridge in a consolation game at 10:30 a.m. Friday.

Follow the Seattle Times high school sports page for coverage of the game.