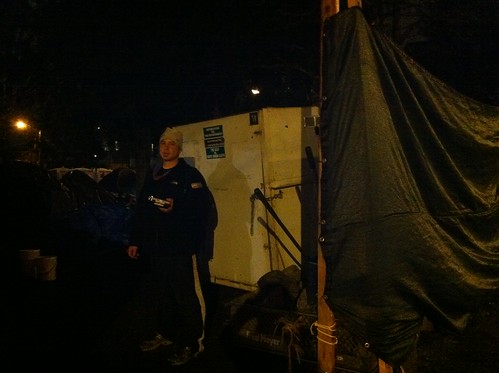 Over 60 new neighbors moved in at 22nd and Cherry when Tent City Three set-up camp over the weekend. The group is staying in the lot at the invitation of Cherry Hill Baptist Church until April 23.

A Tent City has been established on this vacant lot several times already (for CDN stories from past Tent City stays, see here, here and here). This community is moving from Meadowbrook, where they stayed in the parking lot of the Maple Leaf Lutheran Church.

I had the chance to take a tour of Tent City Three last night. People were still working to get things organized after the move, but the city was functioning and lively. My tour guide was also one of the residents working security at the time I stopped by. Each member of the camp must work security shifts and do other work (such as picking up trash in the surrounding area) in order to give back to the community. The camp has two large sleeping tents, one for men and one for women, as well as single and double tents. There is a common space tent and a tent for food, though they can only use a microwave due to fire concerns about the use of open flames. There are also Porta-Potties and washrooms, though this location does not have an on-site shower.

The 22nd and Cherry lot is smaller than their previous home in Meadowbrook. Though most of the Meadowbrook neighbors liked Tent City Three, my guide said, there were some problems from a few neighbors. A couple neighbors set-up security cameras and pointed them at the camp, which many Tent City residents felt was an invasion of their privacy. There were a couple problems with a few Tent City residents, but the group has strict rules for dealing with people who are causing problems. They were kicked out, my guide said.

Tent City Three was featured in the Sacramento Bee just last week as an example of a homeless encampment model that could work for Sacramento’s problems. Seattle’s Tent Cities are sanctioned by the city, whereas the encampments in Sacramento are often raided and can be more dangerous. From the Sacramento Bee:

Albert Walker, 50, has been living in Tent City 3 for about three weeks. He’s a drywaller and earlier this month, he went to Sacramento on the promise of work. The work didn’t materialize and he came back to Seattle.

While in Sacramento he went to the American River Parkway, but said encampments there were disorganized and many people “were carrying baseball bats in their bags.” He felt threatened.

“I probably could have done it, but why?” he told me. “It was drugs and fights.”

In Seattle, the tent cities provide stability for Walker. He told me he’s able to come and go as he pleases and look for work. Shelters in Seattle kick him out for long periods of time during the day, forcing him to carry his belongings.