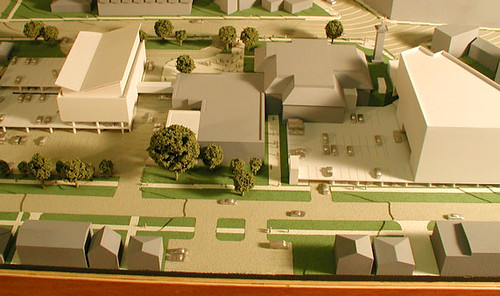 Plans for the re-development of Mt. Zion Baptist Church are moving along, and developers tell us they plan to hold a public meeting in April. Plans for the new campus at Madison and 19th Ave are “not quite ready for public consumption,” said Sam Cameron from Rolluda Architects, which is working with the Church on its plans.

A project model from a 2001 study (pictured on this post) shows plans for two new buildings in addition to the two currently on the grounds as well as the construction of structured parking. Cameron was formerly with Streeter & Associates, a partner with DKA on the 2001 project. The new Master Plan for the Mt. Zion site will be generally similar to the 2001 plans, but with some changes, Cameron said.

“We’re looking at more community oriented spaces as well as some commercially oriented spaces along East Madison Street and still trying to consolidate parking in a parking structure,” said Cameron in an email. “We would like to have a community meeting to solicit ideas about our plans and get feedback prior to moving further.” The meeting has not yet been scheduled.

According to Mt. Zion’s Web site, the church was formed in 1894 and moved to 19th and Madison in 1918 when the congregation purchased an eight-room house at the location.

Fast forward to 2011, and Madison is again stretching to the sky. With demolition of the old CC’s space to make way for the new Cascadia Center, demolition work at 13th and Madison for the 1222 East Madison six-story apartment project that will abut Trace Lofts, demolition planned soon for the 1111 East Union project and the design process underway for another six-story project that will eventually house an Aegis assisted living facility near 22nd Ave E and Madison and the slumbering plans for Jim Mueller’s mixed-use project in the lot that used to house Chocolate City, East Madison between 23rd and 12th Avenues is in the midst of an amazing growth spurt that could further transform the area into a multi-story corridor with all the progress, loss and change that comes with increasing density in Seattle.

Meanwhile, across the street from Mt. Zion, the 1818 East Madison project seems like it’s on the construction — and marketing — fast track. The project’s giant construction crane was recently adorned with a large cow. It appears that marketing for the project’s “131 exciting urban lofts” will be a nod to the property’s past as a Fratelli’s ice cream factory.