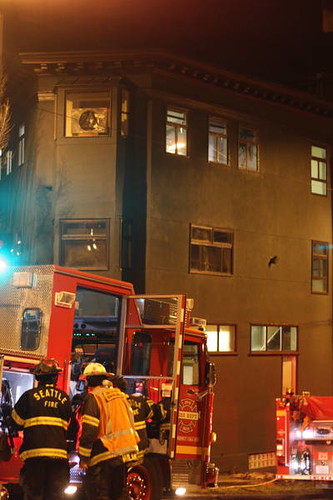 A fire early this morning at the Capitol Hill Alano Club building at 19th and Madison was put out quickly, but not before causing $75,000 in damage. With the help of the building’s sprinkler system, the fire was put out within 15 minutes, reports Capitol Hill Seattle:

Fire damaged the second floor of the building that is home to the Capitol Hill Alano Club at the corner of 19th Ave and Madison early Tuesday morning.

According to the incident commander at the scene, the fire was limited to a room on the second floor of the commercial building. He said an investigation to determine the cause was underway.

A police officer at the scene told CHS that the fire was first spotted just after 2:30 AM when an SPD officer on patrol noticed smoke rising from the multi-story building at 19th and Madison.

Streets around the area were closed during the multiple-unit SFD response that quickly brought the fire quickly under control.

Update: Police believe the fire may have been arson. From the SPD Blotter:

On March 22nd, at approximately 2:40 AM, an East Precinct officer was driving in the 1900 Block of East Madison Street when he observed smoke coming from the second floor of a building and heard the fire alarm ringing.  He called for a response from Seattle Fire and requested other units to assist with traffic control.

After the fire scene was stabilized by SFD, investigators informed officers that they had discovered burglary tools and signs of arson inside the building.  They also noted that it appeared that several safes inside the building had been forced opened.  Detectives from the Arson/Bomb Squad responded to the scene.  It does not appear that there was significant damage to the structure, and the building was closed at the time of the fire.  ABS detectives will continue the investigation.