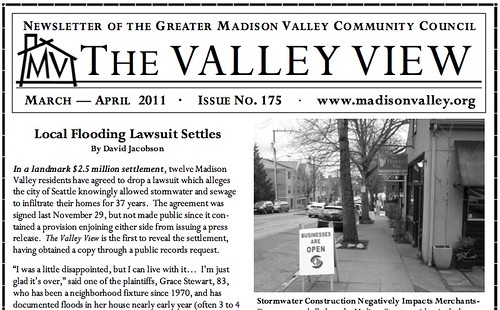 Homes in Madison Valley have been flooding for 40 years since the city installed a system to drain stormwater from Capitol Hill in the early 1970s. Plans to complete a pipe to Lake Washington were never completed, so stormwater gathered in Madison Valley and flooded the basements of homes after heavy rainfall. The city agreed in November to pay $2.5 million to homeowners affected by the chronic flooding. The city also paid a $2.8 million settlement in 2008 after the drowning death of Madison Valley resident Kate Fleming two years earlier. As part of the settlements, the city is not admitting blame for the floods.

The recent agreement, which was signed in November, was first reported by The Valley View, a semimonthly Madison Valley newsletter:

Plaintiffs’ attorney, A. Richard Maloney, said his clients ended up receiving roughly $170,000 to $190,000 per home, depending mainly on whether the Plaintiff owned a home and had lived in it. That’s four to five times what the city had originally offered residents for their diminished home values and for the mental anguish they suffered during years of chronic flooding. Seattle had already paid most, though not all, of the damage done to their personal property during some of the previous floods.

The chronic flooding can be traced back to the Forward Thrust bond projects from the 1970s. The city build a drainage pipe to channel excess stormwater from Capitol Hill into Madison Valley, but lakeside residents lobbied to block a plan to tunnel stormwater to Lake Washington. Opponents cited fear of pollution and litter flowing into the lake.

During heavy rains, stormwater overwhelmed the valley’s sewer and stormwater system, causing rainwater and raw sewage to back-up into homes. Seattle Times reports that the back-up was at times toxic:

The backed-up sewage contained heavy metals including arsenic and mercury as well as fecal-coliform bacteria the residents were exposed to when they cleaned up after an intense rain, said A. Richard Maloney, attorney for the plaintiffs.

While both the 2008 and 2010 settlements concern flooding in Madison Valley, the city said the two incidents have different causes. Fleming’s death in 2006 occurred after surging stormwater flowed through a hole in a fence, knocked over a retaining wall and quickly filled Fleming’s basement, trapping her inside. Fleming, a voice actor with a production company, was apparently trying to save some equipment from the basement when the water surged in. Her life partner Charlene Strong, the Plaintiff in the 2008 settlement, became a leader in the fight for Washington’s domestic partnership law after she was refused admittance to see Fleming on her death bed because Stone and Fleming were not legally married.

A large stormwater project is currently under construction that should prevent flooding in the Valley. Seattle Public Utilities is holding a meeting March 26 to update interested community members on the project’s progress. From SPU:

Join us on March 26 and hear about the updated work plan for E Madison St stormwater infrastructure improvements.

After a series of meetings over the last two weeks, Seattle Public Utilities (SPU) would like to share an updated work plan with residents, merchants, and commuters in the project area. SPU has illustrated the differences between night work and daytime work. Comments were received about both plans, and a new plan has been put together. Come to the meeting to learn more:

Stop by to hear more about: 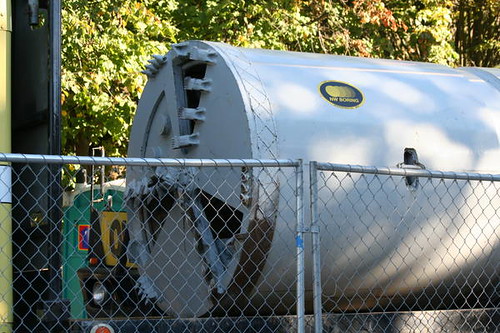