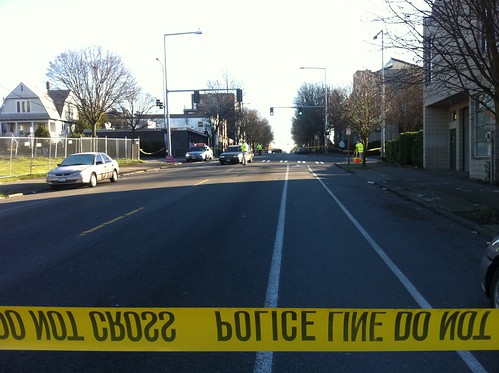 We’re still working on details of a reported collision between a pedestrian and a car at 18th and Yesler. Reader ryanmurphy reported the following:

word from a neighbor is it was Volvo vs. Ped and the Volvo driver was crying hysterically after it happened.  Doesn’t look good.

We will update as we get more information.

UPDATE 9:53 a.m. – Seattle police confirmed there was an accident between a car and an elderly female pedestrian. She was transported to the hospital, but her injuries are not life-threatening. Both fire and police responded to the scene at 8:15 this morning. The traffic collision investigation squad is on the scene. They are typically called to major accidents. Yesler is shut down from 17th to 18th and should be reopened as soon as they complete the traffic investigation. As is standard, the driver was screened for impairment, but no more details were available, since the investigation is still ongoing.