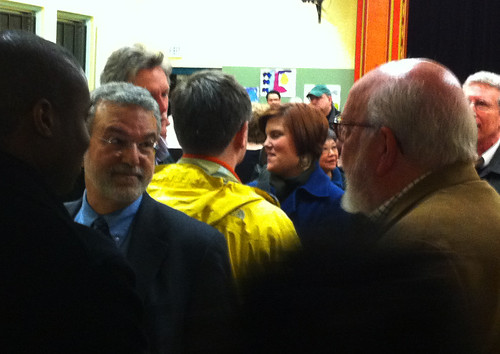 The Jackson Place beast appears yet to be calmed, judging by the events of Monday’s public forum on the planned Downtown Emergency Service Center (DESC) Crisis Solutions Center at 16th Ave S and S Lane Street. Community members expressed anger and distrust of officials from the DESC, King County and the City of Seattle, questioning why the center must be placed so close to residencies in the Jackson Place neighborhood. With the assistance of Peter Eglick, attorney for the Jackson Place Alliance for Equity (JPAE), concerned members of the community dominated the forum, and those hoping to gather support for the project had a difficult time gathering momentum for the creation of a good neighbor agreement.

People challenged almost every official who attended the meeting, and few answers seemed to appease their concerns. One JPAE member asked Councilmember Sally Bagshaw, a vocal supporter of the project, why she had sent DESC Director Bill Hobson an email saying he did a good job “calming the beast” after the November 9 community forum. The email was obtained through a public documents request (PDR).

“I was referring to the media,” said Bagshaw of her remark. She then apologized.

Another area resident who had documents from the PDR questioned Councilmember Tim Burgess, another Center supporter who was in the audience, about a meeting he had with an official from the Department of Planning and Development (DPD). The resident asked Burgess whether he thought it was a conflict of interest to invite Andy McKim from DPD to a meeting to discuss the land use designation for the proposed center while the decision was still being made. If the center is considered a hospital, it would be approved outright for a commercially zoned property. If it is considered a jail, a lengthy public process would be necessary. As we reported last week, Alan Justad said DPD stands by its determination that the Center most closely fits the department’s definition of a hospital. Burgess said he does not see a problem with their meeting.

But the representatives from King County and the DESC who answered questions during the Q&A portion of the forum said up front that they would not answer questions about zoning. Amnon Shoenfeld, director of King County’s Mental Health, and Graydon Andrus, director of DESC’s clinical programs, were able to answer most other questions about how the facility would operate and how plans for the facility developed, but they said they were not lawyers and were not familiar with zoning laws. No one else present at the meeting was available to answer zoning questions, which caused much unrest among the crowd.

Few big pieces of new information came out during the forum. When one person asked why the county doesn’t build one in every neighborhood, Shoenfeld said, “If we had the money, we would love to have more than one.” Of course, the County only has funding for one, and this is the location the DESC has chosen.

Carol Bennett, who said she owns “quite a bit of real estate in Jackson Place,” said she has had to deal with issues from other area services.

“I can’t tell you how tired I am of the services in this neighborhood,” she said. She was particularly frustrated with Operation Nightwatch, a Christian service for the homeless located 6 blocks from the proposed DESC site, she said. “We don’t dispute that [the DESC] facility is needed … but I don’t want it here,” she said.

Kristin Wall of the JPAE asked for clarification on whether there would be 24-hour lockdown, pointing out differences between a story in Seattle Times and last week’s story in Central District News.  “It is not a locked facility,” said Graydon, who explained that people would be able to leave, but staff would try to convince them to stay. If they insisted on leaving, staff would follow them until they left the area.

One person asked about compensation for any property value losses caused by the center, but Grayson said it will not affect values.

King County Councilmember Larry Gossett will be lending a hand in the process to create a Good Neighbor Agreement between the center and the community. He defended the public process followed by King County and the DESC.

“This is not an atypical situation that occurred,” he said of the DESC’s decision to lease the building on Lane Street, then engage the community through public forums to explain the center.

Eglick’s presence at the meeting set the tone at the start. Before facilitator Sharon Maeda could get the meeting going, Eglick spoke out of turn and questioned her bias, since she was hired by King County to moderate the meeting. Maeda was not able to regain much control of the crowd after that. Eglick, who specializes in land use and zoning law, also got the last word of the Q&A by reading documents dictating how clients would be referred to the center and arguing that the center would have the power to hold people for 48 to 72 hours involuntarily. He said a county memo from 2009 outlines the center’s holding power. Hobson has denied that the center would be using police hold, as did the presenters at the meeting.

Lynn Davison has been hired to facilitate the creation of a Good Neighbor Agreement and urged people to help create guidelines for center operations that would meet the needs and address the concerns of area residents. Those interested should email her at [email protected]. She will forward respondents to Councilmember Gossett, who will attempt to select a balanced group. 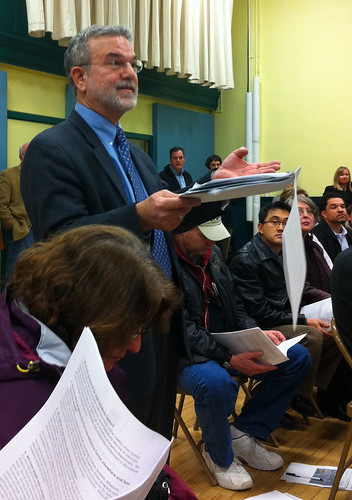 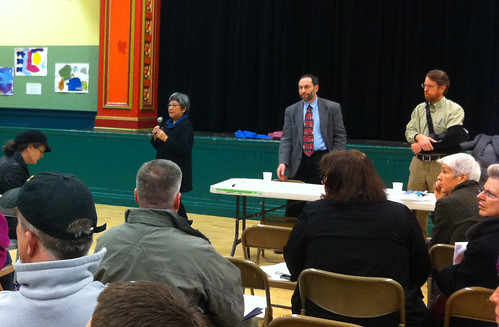