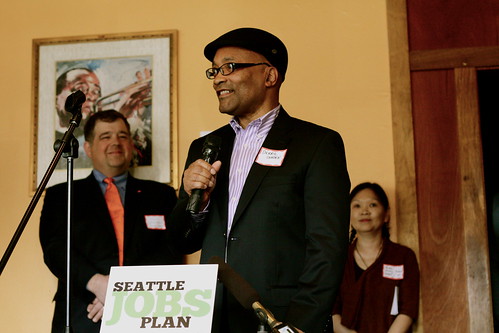 The Central District will share in a $1 million pool being made available to neighborhoods across the city’s central core to help build up Seattle’s business districts — and, thanks to geography and teamwork, they’ll get to share three slices of the pie. According to details released at a Wednesday announcement at 23rd and Union’s Thompson’s Point of View, the Union Street Business Group will administer $100,000 being made available to the CD as part of the Seattle Jobs Plan.

Derryl Durden of East Union Investors, a landowner at 23rd and Union, said the money will go toward organizing a joint event this summer in conjunction with the business district on Jackson that was designated $185,000 by the program. Durden said details of the June joint effort are still being worked out and the investment will help to continue the work going on to transform the area around Thompson’s. “I have never seen the type of partnership that has evolved,” Durden said of the work being done by business and land owners at 23rd and Union to re-shape the intersection long known for drugs and crime.

It’s the second boost in support and financial help this week for areas in the Central District that haven’t seen the same growth as neighborhoods to the north. Earlier this week, Central District News reported on a new Seattle University initiative to support the 100-block neighborhood around Bailey Gatzert Elementary.

And, as we mentioned above, the CD will benefit triply from the $1 million Seattle Jobs Plan pool as $145,000 was also designated for two Capitol Hill organizations working to improve 12th Ave. Last year, Capitol Hill Housing and the Capitol Hill Chamber of Commerce used similar funding to work together on the 12th Ave initiative including the first ever 12th Ave Festival.

Mayor Mike McGinn spoke at the Wednesday announcement during a busy day for City Hall as the Ian Birk situation played out. “While we’ve aggregated our dollars and made sure we’re going to use the dollars we have as effectively as we can,” McGinn said, “it’s not nearly enough to do everything that people want to do.”

Here’s the full announcement from the city on the plan and video from the Seattle Channel of the Wednesday media conference:

“We all love Seattle’s neighborhood business districts,” Mayor McGinn said. “The programs we’re announcing today not only help these specific neighborhoods, but create jobs and add to the vitality of our entire city.”

“What goes on around my business is just as important as what goes on inside my business,” said Gail Thompson, owner of Thompson’s Point of View. “I’m excited about this investment in our 23rd and Union business corridor to help us, the business and property owners, get organized to improve our local neighborhood business climate.”

The local business communities in these neighborhoods have developed comprehensive, multi-year strategies in which the city is investing a total of $655,000:

“I moved my company to Pioneer Square because we were excited about the vibrant, urban environment with exciting amenities for our associates,” said Dan Greenshields, president of ING ShareBuilder. “I’m excited that this investment from the city will allow Pioneer Square to increase its economic development and retail recruitment to improve the diversity of our retail mix.”

In addition, focused investments of $247,500 to support from one to three strategies will be made in these neighborhoods: Ballard, Beacon Hill, Columbia City, Rainier Beach, University District and White Center.

The city will invest an additional $40,000 to expand the Only in Seattle marketing campaign, which highlights the hidden gems of shopping and dining in Seattle’s neighborhoods (www.onlyinseattle.org). The following neighborhoods will join the Only in Seattle marketing effort: Belltown, Capitol Hill, Greenwood-Phinney, Madison Valley, Queen Anne, South Lake Union, and the University District.

OED will fund and manage this program in partnership with Impact Capital, a Seattle-based community development financial institution serving underserved communities throughout Washington.

“In addition to working with business and property owners in our neighborhood business districts, we are focused on providing direct services to businesses to help them grow and compete,” said Steve Johnson, director of the Office of Economic Development. “You can learn more about our services at growseattle.com, including financing products.”