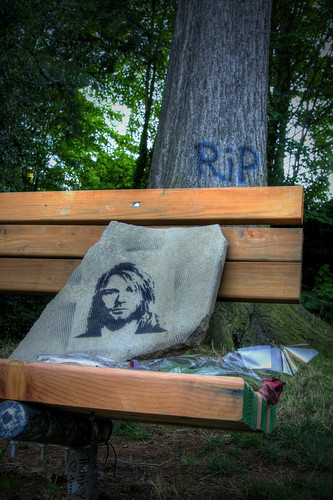 Community members and fans of the late Seattle grunge rocker Kurt Cobain this Sunday are gathering in the park famous as a favorite hangout for the musician to mark the singer’s 44th birthday, clean up the Denny Blaine park and talk about the creation of a memorial to the Nirvana front-man at the site.

The clean-up party lasts from 10 AM to 2 PM but the discussion about the memorial is ongoing. Details on the event and the organizers trying to create a way to mark Cobain’s influence in the city and on the world are below.

You can learn more here: http://permaculture.wikia.com/wiki/Viretta_Park_Repair

The volunteer group, Viretta Park Repair, is collaborating with Green Seattle Partnership to remove invasive species from the park. The group’s founder, Daniel Johnson, hopes to find a balance between Kurt Cobain fans and the neighbors in finding a fitting memorial beyond the benches to celebrate his creative spirit. Johnson says:

“We’ve got to be more assertive and active in decisions about what kind of experience we’re looking for when we visit Viretta Park. Nirvana fans come from all over the world to pay their respects and its about time to remove the doom and gloom by repairing the landscape with invasive plant removal, natural area restoration and a redesign that strikes a balance between providing for the neighbors, Kurt Cobain fans and others who seek an uplifting forested urban experience.”

Fans gather yearly on Kurt’s birthday and around the anniversary of his death, often to write dedications on the benches at the park.(1) One fan volunteer has expressed frustration that no more suitable memorial exists in the park beyond just the benches:

“I have always wondered why there is not something more at Viretta Park as a memorial for Kurt, some king of plaque or some sort of a area where fans can visit.  Yes, there are the benches, which people leave messages on but then the park board comes along and replaces them.  Without him having a actual grave, fans have used the park as somewhere to go to pay their respects to him.”

Johnson, who is also the co-founder of the clothing-optional, permaculture-themed, Gardens Everywhere Bike Parade, will be collecting ideas on what people would like to see in the park online and at the work parties. Johnson will pitch his own ideas for a mix of perennial flowers including a small dahlia garden near the memorial bench, wild medicinal plants, a variety of native plants and edible plants visitors can glean from as well as an interactive memorial installation where fans can leave notes, drawings, flowers around a massive candelabra.