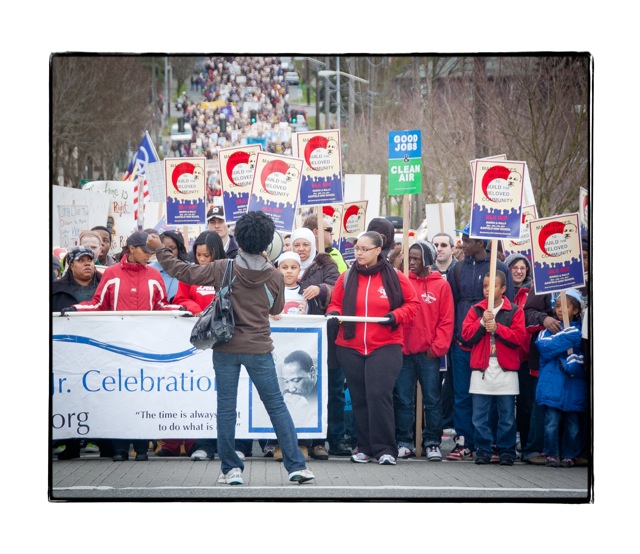 In her most recent column for Grist, Carla Saulter (A.K.A. Seattle’s “Bus Chick“) writes about the city’s Martin Luther King, Jr Day march and what it means her. Basically, she says the march, which began at Garfield High School, is about the diverse community she wants for her children as they grow up. Here is an excerpt:

Each year, Seattle’s MLK Day march has a theme that exemplifies a particular aspect of Dr. King’s philosophy. This year, it was “Many Voices United to Build the Beloved Community.” The theme was chosen, I assume, because of the recent death of Roberto Maestas, a local leader who was a champion of the concept, but I can’t think of a better way to describe what happens at those marches. King used the term “beloved community” to articulate a particular vision, so forgive me if I take a little creative license and present my own interpretation.

The march-goers run the gamut — old-school civil rights leaders, peace activists, members of historically black fraternities and sororities, schoolchildren, religious groups, artists, community organizers, political types looking to sell themselves to a captive audience, and folks who just want a way to honor what King stood for. They show up in the pouring rain or biting cold, holding handmade signs, leashes, and children’s hands. They bring megaphones. They bring instruments. They bring umbrellas and extra gloves. All of us walk together, in the street, past the familiar landmarks we love, remembering a man who inspired us. And in this spirit of camaraderie we are moved to introduce ourselves to people we’ve seen — sometimes dozens or hundreds of times — in other contexts. We leave feeling closer to our community, reminded of our interdependence and of our collective power.

This is why I am drawn to the march year after year, and why I will continue to bring my children. It is also why I am, and have always been, drawn to cities. Though I try to use this column to share the benefits (and address the challenges) of raising children in urban environments, the practicalities are somewhat beside the point for me. For me, the point is beauty of the city — a beauty that extends beyond a lovely skyline or great theaters and restaurants — that is manifested in the incredible mix of humanity represented in its residents.