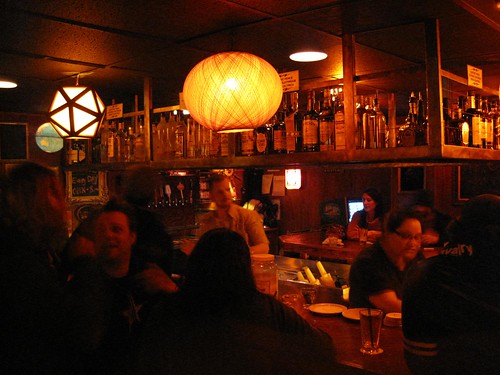 Someday, you might find Hutch Handmade on the bar
at the Twilight (New Twilight Exit 2, by asabass.)

It will be another few months before he has gone through all the federal, state and city regulations, but the Central District’s Kyle Hutchins is hoping to start a small-scale rye whiskey distillery near 23rd and Cherry. There are no plans to sell or have tastings at the location, though. It will be three or four years before the first batch has aged enough, anyway.

Unlike some other distilleries that have started up around town since 2008, when state law opened the door for craft distilleries, Hutch Handmade Spirits will be a relatively small operation.

“I’m more like a homebrewer, kind of,” said Hutchins. He considers it something of a hobby. But unlike with homebrewed beer, you need to go through many regulations in order to distill spirits.

Hutchins had some trouble finding enough Washington-grown rye to meet a requirement of the law that at least 51 percent of ingredients come from in-state, according to Seattle Met who talked to Hutchins about his project last summer but didn’t make note of his Central District plans.. But he found a farmer growing rye for baking and convinced him to grow more.

Hutchins did not want to go into too many details about the self-funded endeavor until registration is completed, so we’ll follow up once things get moving.

Hutch would certainly not be the first distillery in the area. Oola Distillery is taking over the old Panzanella building at 14th and Union. And, of course, there’s Sun Liquor on Pike.