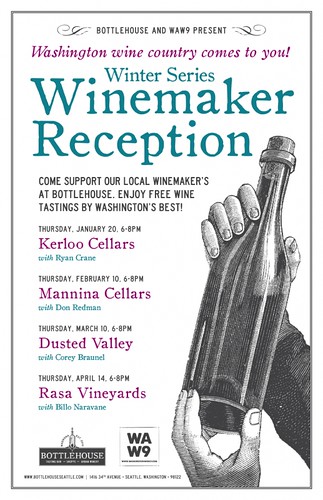 For those looking to get your wine-on free of charge, Madrona has several opportunities in the coming weeks and months.

The folks at Bottlehouse are hosting monthly free tastings with celebrated Washington winemakers starting this week and going until April, as part of their “Washington Wine Country Comes to Bottlehouse” series. Bottlehouse has partnered with Washington Wine 9 for the series. The first tasting is this Thursday, Jan. 20 from 6-8pm with Kerloo Cellars.

And Dulces Latin Bistro, which as we’ve reported is moving from Madrona to 1314 E. Union Street and becoming Kava Bistro & Wine, has two free Wednesday wine tastings left at their current location. This week from 5-8pm, you can sample three Italian wines, two Argentinian red wines and a French Cabernet.