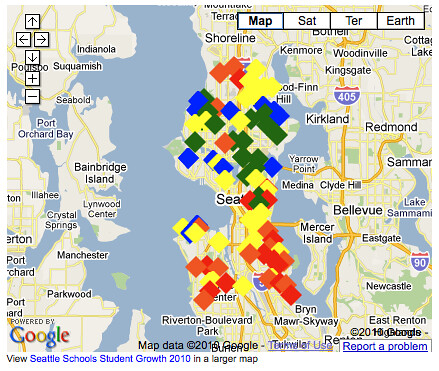 Seattle Public Schools recently released individual school report cards to the public for the first time. Tuesday night’s meeting will bring together parents, community members and school officials to talk solutions. Organizers say Nancy Coogan, Seattle school’s central region executive director and local school principals will be in attendance with an agenda including an overview of the region’s School Reports and breakout discussion sessions centered on improvement plans and next steps. Here are the details from the Seattle Council of Parent Teacher Associations:

Seattle Public Schools recently released its annual District Scorecard as well as individual School Reports. These are designed to show the community where Seattle schools are meeting state standards as well as district goals. There are some great successes; there is also a pervasive achievement gap in nearly every school in the district.

The Seattle Council PTSA is co-sponsoring these meetings to help the greater community understand the challenge and to give community members an opportunity to speak directly to the administrators in charge.

We need your voices there. The first meetings are this Monday, Nov. 29, (NE) and Tuesday, Nov. 30 (SE). Following are a schedule and links to the reports. Each school has an improvement plan, those can be found on page 2 of the School Reports.

You can find specific school reports and improvement plans here.

0 thoughts on “Your homework: How to improve Central District schools”