The corner of 23rd & East Union here in the Central District has been getting a lot of attention lately.  With the sudden closure of a gas station, the long vacant restaurant space that used to be home to the best cheesesteak sandwich in Seattle, and an empty lot waiting impatiently for stalled development to start, three of the “Four Corners” are barren. As one long time Central District resident put it, “Sometimes it seems like a vortex, and you worry that it’s sucking the rest of the neighborhood with it.”

But thankfully there is a group of local business and land-owners who are committed to long term development and are making plans to see the area thrive.  Although the patience of many neighbors is wearing thin, the determination and enthusiasm being shown by The Union Street Business Group’s members is bringing hope to the neighborhood.

Kevin Spitzer, who operates Central Cinema at 21st & Union, explained that when the group formed over six years ago the intention was to create something more established and formal, with a president, vice-president, treasurer, etc.  The group started out strong, but after a few years things started to wane, and understandably so.  “We’re all so busy trying to run our small businesses that it’s hard to find time to organize a committee too,” Spitzer said.

Thankfully there is strength in numbers, and the Union Street Business Group is growing.  In 2009 Cortona Cafe opened at 25th & Union, and others have purchased local properties that were neglected or ignored in the fallout of the recession these last few years.

Spitzer explained that recently the USBG decided to “decentralize” some and started a Facebook page to replace their website, which was more cumbersome to update and maintain.  He said that currently there is no official board for the group, but there are a lot of people showing involvement.  With this momentum the group is working with the Central Area Development Association, or CADA, to apply for a grant to improve the neighborhood.  CADA is the organization behind the the revitalization of 23rd & Jackson a few years back. 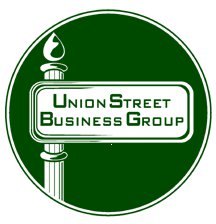 Will Little and Jason Davison own and manage Cortona Cafe and they are excited by the “synergy” they are experiencing as they meet with other local business owners to discuss what they can do to support the neighborhood and create an environment that is “economically beneficial and diverse.”  When we spoke on Sunday, Little was looking forward to Tuesday morning’s meeting to discuss the grant they are partnering with CADA to apply for.

Ian Eisenberg is also excited to be involved in the USBG and said that in the future he would like to see the group become more of a formal entity with membership dues, advertising and marketing.  Besides owning and operating the car wash near the intersection, Eisenberg also is working to lease the long-vacant restaurant space at the corner of 23rd & Union.  He had six serious inquiries into the property, but he said five of the six proposals were from large, national chains that wanted 10-20 year leases.  Eisenberg didn’t want to tether the property to one corporate entity when the neighborhood is in transition and there may be opportunities for redevelopment that would better serve the community in the next few years.  So instead he is working with a friend to open a coffee shop and bakery in the space in about two months, which will likely be a welcome addition to the corner.

Eisenberg also said that he is under the impression that Jim Mueller is committed to getting his mixed use development at 23rd & Union underway in 2011, and that Merle Richlen, the owner of the recently vacated gas station, has repairs and improvements planned and a tenant lined up to move in. We’ll have more from Mueller soon.

Tom Bangasser, who owns MidTown Center, said some of his tenants are planning holiday promotions and he would have more to share about that soon.

While the Central District is fortunate to have some established, successful businesses along Union Street, there is still a lot of work to be done to make it a thriving business district.  In the meantime, some of these local business owners have pulled together to bring a little holiday cheer to the downtrodden intersection with hundreds of LED lights strung on the four corner properties.  And Little says a holiday event is planned for the evening of December 18th, likely on the plaza at MidTown Center – stay tuned for more details on that.

**EDIT & CORRECTION** Jean Tinnea has notified us that Tinnea & Associates is a tenant in the building near 21st & Union, which is owned by 21 Union, LLC.  The building also houses 20/20 Cycle, Mind & Body, Central Cinema, Reel Grrls and Hollow Earth Radio.  Tinnea & Associates is a corrosion engineering firm.  21 Union, LLC owns one (1) building at 21st & Union that houses the above-referenced tenants.  Thanks for the clarification, Jean!  Sorry for the oversight.