23rd and Union just can’t get a break. As landowners show signs of turning the four corners around and SPD and county prosecutors make headway on stemming the drug trade in the area, now it turns out there was a dangerous light pole at the intersection. Danger! Danger! High voltage.

The Thanksgiving day death of a dog electrocuted when it stepped on a metal plate near a streetlight in Queen Anne has lead to a process to inspect 20,000 metal utility poles and the discovery of three more electrified poles in the city — one on Capitol Hill, one on First Hill, and one in the Central District — each due to central Seattle’s aging infrastructure. 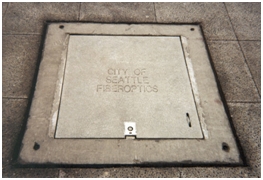 Here are the locations and the details of the electrified poles that Seattle City Light found in their inspections so far:

Each of the lights has been shut down until repairs can be made, according to City Light.

While the exact cause of the escaped voltage is not known for two of the three locations, age appears to be a factor in each as old wiring was to blame on Aloha and the two metal poles involved in the First Hill and Central District locations were both 30 to 40 years old.

The voltage in each of the three locations was potentially dangerous. The Queen Anne dog death involved about 90 volts but even 30 or 40 volts can be lethal to small creatures — including humans.

Another pole with frayed wiring was also found in the High Point neighborhood prior to the discovery of the three latest problem poles. 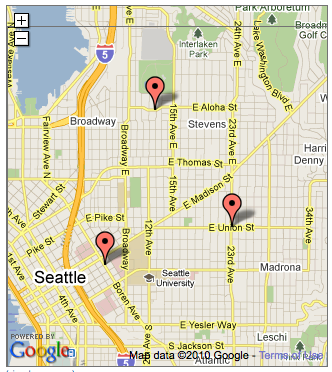 No word on how far along City Light is in its audit of Seattle’s 20,000 streetlight poles and 10,000 metal vault covers. The department says it plans to have the work completed by at least May but is looking at options to “expedite” the process. In the meantime, you might want to watch your step around our city’s aging infrastructure.

Here’s the statement released by City Light documenting their latest status on the situation:

“So far, we have inspected 270 metal streetlight poles at High Point and GreenBridge developments and have found no additional contact voltage situations at these locations,” says Carrasco. “We will move on to Holly Park and Rainier Vista tomorrow. In addition, we have identified three other individual metal streetlight locations where there was voltage present. These include 13th and East Aloha East, where there was 60 – 80 volts. We found very deteriorated wire. The original cables were installed in the 1920s. Another location was at Boren and Marion, where there was 90 – 105 volts present. This pole is 30 – 40 years old. And, the final location was at 23rd and East Union with 60 – 80 volts from a metal pole that is 30 – 40 years old. There was no indication of the cause of voltage release at the last two metal streetlight poles. We have de-energized the lights until repairs can be made.”

City Light will continue its own inspection efforts and is evaluating options to expedite the original end date for inspection completion in May. City Light will routinely up-date the public on the progress being made with inspections.