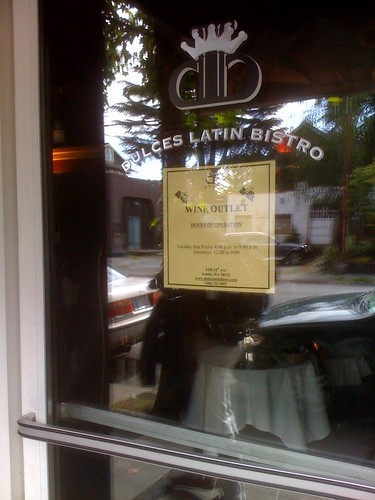 UPDATE: Owners Julie and Carlos confirmed that the economy was the main factor in closing Dulces. They have been behind on the rent for over a year, and came close to losing their home.

Big news on the restaurant front in Madrona – Dulces Latin Bistro will close at the end of January, 2011, after 17 years of business at 34th and Pike.

Changing neighborhood demographics and the economic climate contributed to owners Julie Guerrero and Carlos Kainz deciding to close the restaurant and move to a to-be-determined location on Capitol Hill.

A pizza restaurant will be moving into the space – which will make two new pizza places on 34th, with Zaw coming in the spring as well.

Readers will recall that Dulces opened a wine outlet and revamped their menu this past summer to bring a diversified clientele to the location.

Through the end of January, you can still visit the Wednesday free wine tastings (5-7pm with complimentary hors d’oeuvres) and the New Year’s Eve $40 prix fixe dinner from 5-9pm).

We have a call into Julie and Carlos for more details and will update this post accordingly.

0 thoughts on “UPDATE: Dulces to close end of January; pizza restaurant moving in”