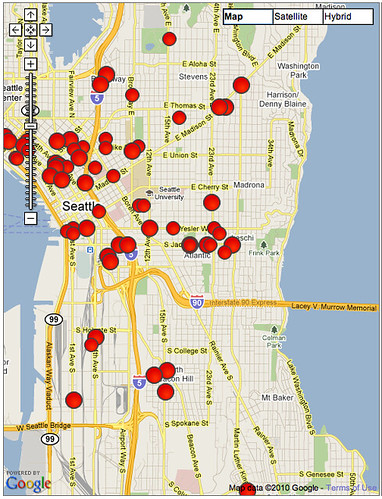 SPD is reporting a Tuesday night armed street robbery near Yesler Terrace. Details are below. We’ve included a map from SeattleCrime of reported robberies in the area over the last 30 days. You’ll note that the area south of Yesler was a problem spot for robberies in October.

On November 2nd at approximately 7:40 p.m. officers responded to Harborview Medical Center  to investigate a street robbery.  Officers contacted the victim, who stated that she had been accosted by a group of three or four black males while she was walking on the stairs leading from Harborview toward Yesler Way.  The victim stated that one of the suspects displayed a handgun and then struck her in the head with it, knocking her to the ground.  The suspect attempted to remove her backpack, but could not.  He did take her cell phone.  The suspects then fled on foot southbound.

The victim was able to run back to Harborview to seek aid, and someone there called 911.  The victim did not suffer any serious injuries.

Officers and a K-9 unit searched the area extensively, but were unable to locate the suspects.  The suspects are described as black males, ages 18-21 years old.  The suspect with the gun was described as 5′ 9″, thin, wearing a white t-shirt and blue jeans.

0 thoughts on “Woman knocked in head with gun, robbed near Yesler Terrace”