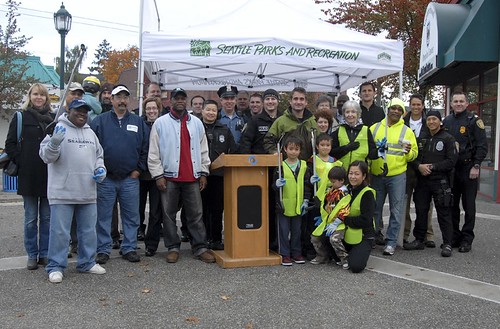 When it comes to crime prevention, law and order can only go so far. Sometimes, you need a little elbow grease. A group of neighbors, community leaders and East Precinct representatives including commander James Dermody fanned out across the streets around 23rd and Union last weekend in a neighborhood clean-up effort that netted 130 pounds of trash and put feet on the street in an area that could use the attention. Operation Safe Union has become operation Safer Union. Here’s the media release from SPD on the clean-up. More are scheduled for coming weeks. We’ll check in to make sure you get forewarning before the next scheduled “operation.”

On Saturday, October 30 more than forty Seattle residents picked up litter, painted out graffiti and removed invasive plants along 23rd and Union streets. The event marked the kick off of a 90-day SPD inspired project designed to eliminate blight and diffuse crime at this well travelled intersection.