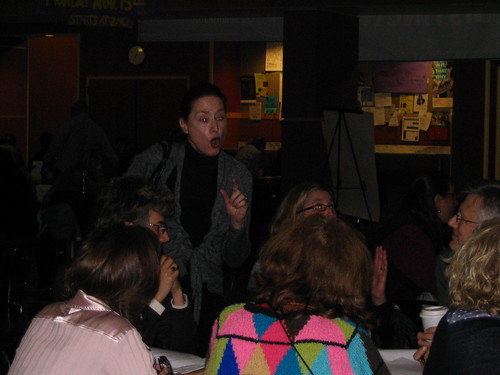 This is intended as mainly an update on the stories about Garfield and the Student Assignment  Transition Plan, meaning meetings to review the current student assignment plan and begin to plan possible changes to it for next year.

The Garfield commons area was packed with at least 200 people, probably more.  The organization of the meeting didn’t serve such a diverse set of concerns and schools well.  *See list below.  Only a small portion of the line to make opening public comment had an opportunity to speak due to time constraints.  Eventually there was an attempt to identify speakers on different subjects in order to allow all issues to have some time at the microphone. The district then presented a Power Point presentation before breaking all into groups for discussion.  Most who stayed appeared to be concerned with Garfield.  The speakers addressing siblings being able to chose to go to the same schools, kindergarten assignments, overcrowded elementary schools, and other boundary issues mainly spoke at the beginning and were not reflected in the small group reports  at the end.

Kay Smith-Blum was there to meet with the groups and promoted the idea of a staggered schedule fort Garfield.  The teachers and other District employees have contracts about how many hours they work.  Students do not.  I did not make a meeting at Ingraham High School on Wednesday which offered more details on a proposal to develop an additional pathway for APP students to Ingraham where there is an existing International Baccalaureate Program.  However  Dr. Vaughan shared that this option is intended to draw students from Garfield voluntarily, not as an involuntary assignment.   Both Dr. Robert  Vaughan from Advanced Programs  and Kay Smith-Blum mentioned Interlake High School in Bellevue.  With little time to do research I can only say that it has been highly rated nationally and offer web sites: http://en.wikipedia.org/wiki/Interlake_High_School or http://www.bsd405.org/default.aspx?tabid=120.

Other solutions offered were to close  open choice seats for Garfield next year, redraw boundaries and various options about APP.  Most asked for some data about the how big the problem is and also asked the the District to take time to do it right.

The  District summary of the comments is pretty good but does not  reflect the number of people who spoke to  some of the same points:    http://www.seattleschools.org/area/implementation/index.dxml

For many of the controversies on Teach for America and other issues look at the general blog and peruse the side bars: https://www.blogger.com/comment.g?blogID=28765366&postID and to echo the reminder from Madrona, don’t forget: the meeting on the reports on the schools on December 9th at Washington Middle School at 7:30 PM

To its credit the District is posting much of the data as it becomes available: http://www.seattleschools.org/area/implementation/index.dxml

I highly recommend the drop-in sessions if you have specific questions.  I talked with Tracy Libros regarding data showing the assignment areas and where student attend school and also show which assignment areas students in a specific school live.  That should be available soon.  The next drop in session is December 14, 6:00 to 8:00 PM at the District and the work session is December 1: Please see: http://www.seattleschools.org/area/news/1011/20101026_NSAP_R

0 thoughts on “Updates: future of Garfield assignments dominate Transition Plan Meeting and others”