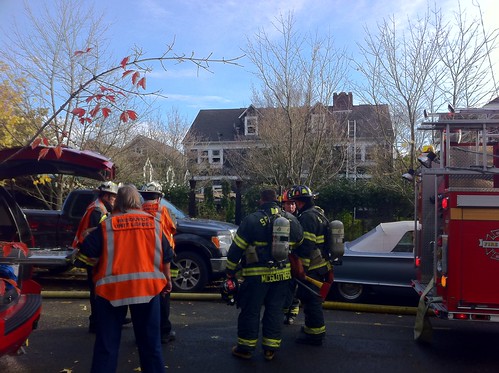 We’re at the scene of a large fire response in the 600 block of 35th, right at the border between Madrona and Leschi.

It appears the fire started in the attic based on the broken windows and other damage there.

Bystanders tell us there were no injuries as the homeowners were out at the time of the fire.

There’s a number if high-end homes on this block, with excellent views due to their perch at the top of the hill overlooking Lake Washington.

More details as we get it…

Update: We spoke to neighbors who said that they saw the smoke coming out of the south side of the house, and neighbors across the street called 911. The fire appears to have started in the upstairs bedroom or bathroom, and caused significant smoke damage to the upper stories of the home.