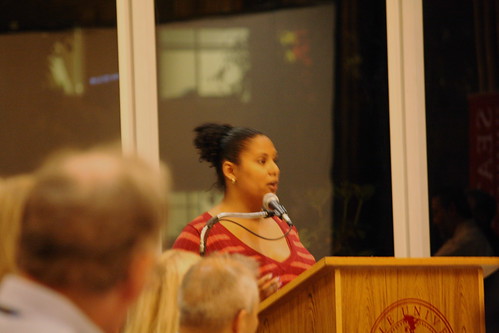 Public officials and representatives from the task force that created a new set of recommendations for transforming the way Metro makes service and route planning decisions presented their work and heard from the community — and Metro drivers, themselves — about public transit needs in Seattle at a town hall meeting held on the Seattle University campus Tuesday night. A recurring theme for many of the community speakers: increased efficiency within Metro is good but there should be fewer cuts to public transit if regional governments are continuing to spend money on creating more roads. Meanwhile, labor was also present Tuesday night as the drivers union made its concern about increased workload and more aggressive scheduling known.

We’ve included the final recommendation report from the King County Regional Task Force and some highlights from the plan, here. Despite the broad nature of the plan, much of the public comment was, of course, very specific and personal.

“I really sympathize with people who lose their favorite bus. I lost my favorite bus,” one Capitol Hill resident who spoke said.

Earlier, a large group waved signs as their representatives spoke out against cutting Route 42.

While many of the public speakers praised the idea of a more efficient public transit system, the details of the recommendation left some wanting more. One speaker called the task force “intellectually dishonest” for presenting a rational framework for planning but not including specific requirements for how Metro must implement many of the recommendations.

Representatives from the Amalgamated Transit Union Local 587 voiced their concern to the task force about the increasingly hectic scheduling for drivers and its impact on health, performance and safety. One driver went so far as to call for the county to “stop the barbaric treatment of Metro drivers.”

Another speaker pointed out a missing element in the plan, asking the task force why it has apparently glossed over the future of Metro’s trolley system. Metro must make a decision on how to best replace its fleet of aging electric trolley buses that serve many of the city’s most-hilly neighborhoods and several key routes in the Central District.

We’ve attached the final recommendation document to this post.

0 thoughts on “Public weighs in on Metro task force recommendations”