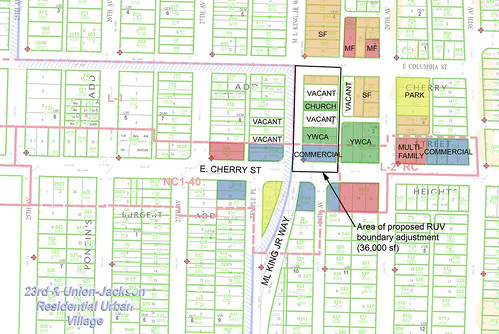 The corner of Martin Luther King, Jr. Way and E Cherry St. is something of a mishmash. Made up of a mix of small businesses, a YWCA, a church, vacant lots and private residences, this corner is the intersection of three thriving neighborhoods – Leschi, Madrona and the Central District – but lacks a distinct character of its own.

Resident and homeowner Kiki Michelle Gram, who lives on the corner of E. Columbia and MLK, is on a campaign to change that. She’s petitioning the city to extend the existing 23rd & Jackson Residential Urban Village (RUV) boundary to include the area bounded by E. Columbia, E. Cherry, MLK Way and the alley on the east.

The idea is that extending the boundary – which currently stops at the middle of MLK – would bring more city attention to the area, increasing the opportunities for development of that corner in the future.

Rather than some developer swooping in and building townhouses, inclusion in the RUV would ideally bring in more community organizations to the area. It would not change the existing zoning, Gram says, but would amend the current situation where the businesses on one side of MLK are included in the RUV whereas the businesses across the street are not. The adjacent property owners support the proposal as well.

At this point, Gram’s aim is simply to submit the proposal to the city for consideration, which is why she presented to the Madrona Community Council last week asking for the council’s support. The MCC voted almost unanimously to write a letter of support for submitting the proposal for consideration.

Gram has until the beginning of December to gather signs of support from the community to submit her proposal. To date, she has signatures supporting the proposal from the MCC, the adjacent property owners and neighbors and the Central Area District Council.

What do you think about the prospects for the corner of MLK and Cherry?