For people without a home* who are mentally ill or are substance abusers, the cycle from the streets to jail and the hospital and back can be difficult to escape. This cycle is also costly to taxpayers.

To provide a place of therapy for extremely troubled homeless*, the Downtown Emergency Services Center (DESC) plans to open a new Crisis Solutions Center at 16th Ave S and S Lane St. The facility will be able to serve 46 people at a time and will be staffed 24 hours a day.

However, there have been some concerns from local residents who fear this facility will be a danger to their neighborhood. In an interview with the Puget Sound Business Journal in early August, Bill Hobson, Executive Director of the DESC, said the group anticipated some concerns from residents near the then-unnamed location. For a taste of those concerns and the community response to the plans, take a look at the comment thread on a recent CDN post about the proposal.

To answer to these concerns and other community questions about the center, the DESC is holding a meeting Tuesday, November 9 from 6:30 to 8 p.m. at the Giddens School, 620 20th Ave S.

For more information on the project from the DESC, here’s a letter from Hobson to residents.

* UPDATE: According to Nicole Macri at DESC, the proposed center will not just focus on the homeless. 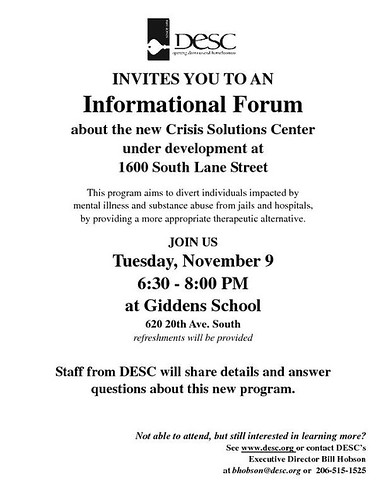