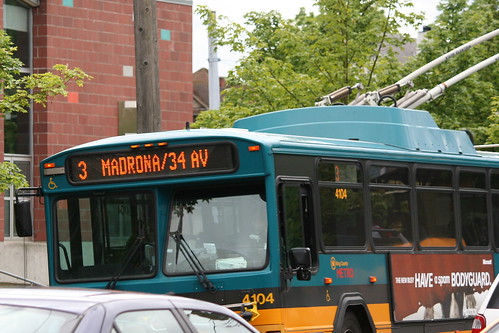 Metro’s #3 and #4 buses are the workhorses of Central District transit. They each carry thousands of riders per day and rank in the top 20 busiest routes in the Metro system.

But regular riders of the #3 and #4 buses know that schedule reliability is not among their strengths, and a key cause of delay exists around Harborview where the buses have to negotiate a tight left turn from 9th to James, fighting all the way with a mess of other vehicles trying to get to and from I-5.

The county has definitely noticed that too, and are in the initial stages of investigation into possible solutions.

Metro spokesperson Linda Thielke tells us that it all started during work Metro did on how to cope with the closing of the Alaska Way Viaduct and speed up bus service through downtown. In that process Metro planners identified the turns to and from James, both on 3rd and 9th, as major causes of delay and began looking at alternatives.

One option that jumped out was Yesler Way, currently only served by the infrequent #27 route. It’s a much less congested roadway and doesn’t have any access to I-5, allowing it to avoid the rush of hospital employees that clog up James during rush hours.

The new routing would send buses up Yesler from James, turning left on 8th Avenue and then rejoining the usual path on Jefferson in front of Harborview.

Metro staff says that the new route would save an estimated 4-5 minutes per trip, and result in $997,000 annual cost savings for bus operations.

But moving the buses would require installing new bus wires on Yesler, 8th, and 9th Avenues. That’s expensive, and would require capital funding that Metro currently doesn’t have. And any attempt to move forward would require a significant amount of engineering, public outreach, and other planning.

So for now the project is staying in a conceptual phase. But as a regular rider of that route, we would definitely like to see that kind of time savings.

0 thoughts on “Metro study says routing 3/4 buses via Yesler would save time, $”