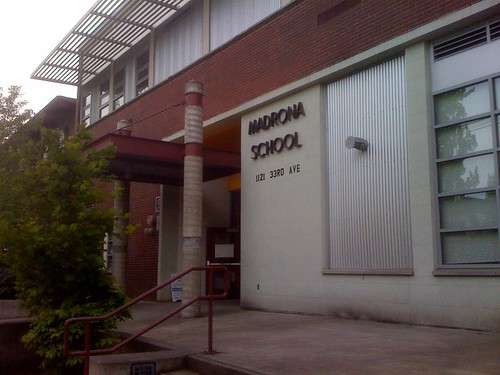 The 82 schools were ranked on a new rating scale of 1 to 5 that measures not just how many students pass state tests, but how much improvement students make from year to year. A 1 meant the school had a low passage rate on state tests and low-medium improvement; a 5 indicated a high percentage of students passing state math and reading tests and students are improving.

The middle school at Madrona K-8 received a 3, while the elementary school received a 1, the equivalent of a failing grade. You can read the full detailed report online.

We’ve obtained an email from a neighborhood list where multiple neighborhood residents expressed support for the level of education and community atmosphere at Madrona K-8, as well as some prospective parents voicing concerns over what the ratings indicate about the rigor of the curriculum.

Representatives from the Madrona PTSA noted that the recent school report card data is extensive, and that Madrona K-8 principal Farah Thaxton and her staff are preparing information for families on what this actually means for the school. There will be a town-hall style meeting on December 7, from 7-8:30pm, for the entire Central Region at Washington Middle School to discuss the school reports specifically, and the PTSA urged members of the community to attend to learn the context behind the data used in the report cards.

Seattle Public Schools is also hosting a community meeting tonight at Garfield High School from 6:30-8pm on Year 2 of the Student Assignment Transition.

What do you think of the Seattle Public Schools’ ratings of Madrona K-8?