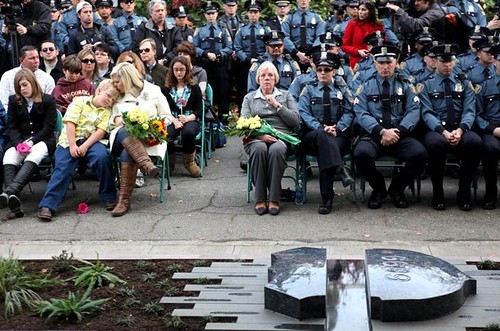 News outlets from across Seattle joined CDN in covering Sunday’s ceremony to dedicate the memorial to Seattle police officer Timothy Brenton at 29th and Yesler. Our own coverage of the day is here. Here is a look at coverage from others in the Seattle news family.

Leschi is a diverse neighborhood of black and white, rich and poor, and sometimes relations with police are strained. Pained and fearful, many wrung their hands and wondered what can we possibly do?

A year out from the killing, they built much more than a memorial.

They dedicated the granite slab, which is inscribed with words that described Brenton, such as “friend” and “husband,” “devoted” and “loyal.”