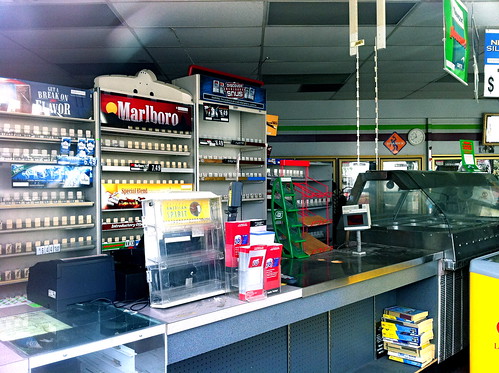 CDN has learned that a family that has been part of the Central District’s car culture for more than 50 years is also connected to the latest change in automotive commerce in the neighborhood. According to people close to the situation, the sudden closure of the Union 76 service station was brought about by a decision to part ways with the existing tenants who have been operating the service station and the market.

Messages to landowner Merle Richlen asking her to confirm these details have not yet been responded to. We will update this post if we are able to speak with her about the situation and her plans for the property.

According to the sources, Richlen and the members of her family with a stake in the property are looking for a new tenant to take over the gas station. We’re also looking into details on how that kind of transaction works with Union 76 parent company Conoco Phillips.

We have not been able to reach Ki Chang Park, the listed head of East Union Food, LLC that operated the station.

We did, however, have a conversation with Saul Hernandez who is involved with the Taco City USA business that has been operating on the lot. Hernandez says the truck — which was the first concern for many commenters on the initial post — needs a new home now that the people they had an agreement with are out of the picture.

Some were quick to see the closure as a sign of decay at the corner of 23rd and Union where, tonight, three of four corners will be unused for any legal commerce. The empty lot across Union to the south of the station is in development limbo. Across 23rd, the Philly’s space stands empty despite recent work to upgrade it for potential tenants. The southeast corner is home to a Seattle Police drop-in station and the state liquor store.

The Richlen family’s connection to the gasoline business in the Central District goes way back. From the CDN comments,  seakaypenner tells the tale:

Back in the day, when Jack Richlen owned it…..and then his son in law….although we never actually bought any, my (now grown) kids still use “the Kickin’ Chicken place” as a way to identify that intersection.

And yeah, it costs a fortune to redevelop a site formerly used as a gas station due to the haz mat situation…..I suspect if another station (or the same one) doesn’t go in there it will sit empty for a long, long time.

Hopefully you’re right, and they’ll get it all figured out and re-open, either the same owners or new ones.