A relatively small number of credit card fraud reports are coming into SPD from the Central District as a wave of financial crime that appears centered in Capitol Hill continues to spread. A map showing the week’s financial fraud reports to SPD across the Hill and into the CD is below.

If you have found that your account was compromised, contact your financial institution and then report the fraud to SPD at (206) 625-5011 (non emergency line). Note: The non-emergency line appears to be staffed on limited schedule so you may not be able to make a nighttime report. We’re checking on the schedule.

Here is the map of central Seattle including the Central District showing where people who have reported financial fraud to SPD in the last seven days live or work. 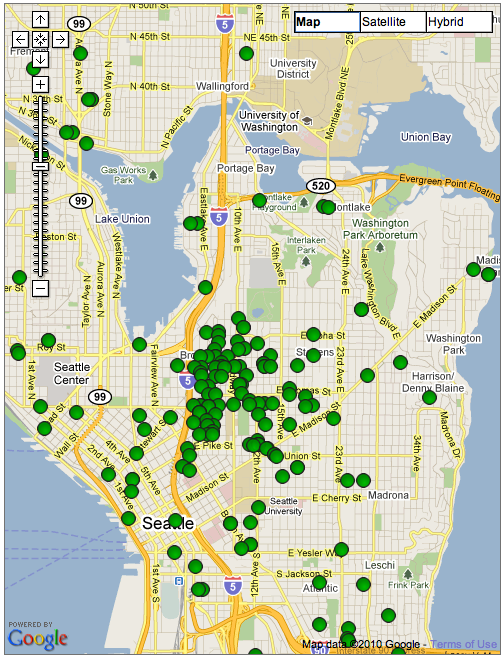 18 more fraud reports were filed by people in the Capitol Hill area on Saturday. With Friday’s reports, that brings the total number of incidents reported to Seattle Police since we first reported a wave of fraudulent activity around the Hill to 41, according to data collected by Capitolhillseattle.com. The total number of accounts impacted is higher as we’re hearing from some victims who had not reported the fraud to police.

As we’ve been seeing, anecdotes from people who found new fraud over the weekend include shopping at various Hill locations — many on or near Broadway — involve a wide variety of financial institutions and include reports of small test transactions followed by large purchases at stores from around the country and, frequently, the globe.

We are still looking for the first statement on this wave from local officials. So far, SPD has been reluctant to say anything but acknowledge that there does appear to be a highly unusual cluster of fraudulent activity in the area. SPD has not yet said that any of these incidents are skimming. We’re told detectives are busy investigating the situation and have not been available to provide briefings on the situation. Meanwhile, we are also in contact with the Secret Service’s Electronic Crimes Task Force but their Seattle office has not yet confirmed their involvement in the investigation.

For more on the Capitol Hill wave and similar situations that have hit in other areas of the country, check out the latest from Capitolhillseattle.com.