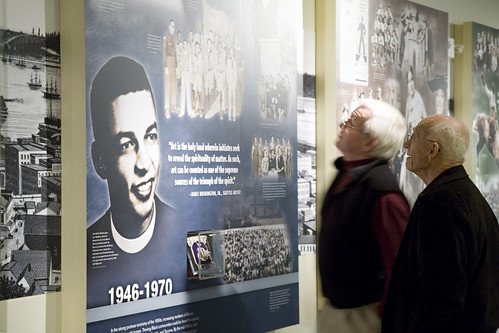 Our neighborhood museum is opening a new exhibit tomorrow that will honor more than one hundred local healthcare professionals for their work on improving the health of the African American community here in Seattle. Called “Checking Our Pulse”, it will explore the history of healthcare and the achievements of African American medical professionals in the Seattle area.

The exhibit will recognize the efforts of two residents here in the Central District. The first is Benjamin Danielson, who is the Medical Director at the Odessa Brown Children’s Clinic at 20th & Yesler:

Dr. Benjamin Danielson joined Seattle Children’s Hospital in 1995. He has been the medical director of Odessa Brown Children’s Clinic in Seattle since 1999, and he holds the Janet and Jim Sinegal Endowed Chair for the Odessa Brown Children’s Clinic. The clinic has been an active part of Seattle’s multiethnic Central District since 1970, largely serving children from disadvantaged backgrounds. Dr. Danielson previously worked at a pediatric sports medicine clinic at Harborview Medical Center, a school-based teen health center and a primary care clinic in West Seattle, and was an emergency department attending at Seattle Children’s. Dr. Danielson splits his time between clinical care, administrative responsibilities, community advocacy and hospital responsibilities. He serves on several community boards, is active in mentoring efforts and participates in a number of Seattle Children’s committees. Dr. Danielson is frequently interviewed for KONG-TV’s “Ask the Doctor” segments.

Also included is Devon Love, the Project Director for the Center for Multicultural Health, who “has helped to move the organization forward in its outreach efforts and goals through local and national presentations which have enabled the work of CMCH to be recognized and influential in the community.” Love also serves as Chair of Steps to a Healthy King County, which focuses its efforts on ways to reduce the effects of asthma, diabetes, and obesity.

The museum is offering an online sneak peak today at 1pm, where two local doctors will give a live preview of the exhibit. You can catch that in the video player below.

The exhibit will open to the public Friday at 11am and run through June of 2011. NAAM is located in the old Colman School building at 2300 S. Massachusetts.