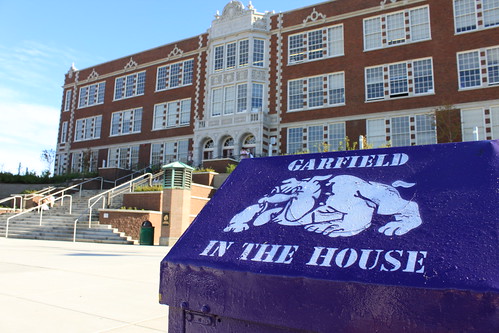 Our friends at the Seattle Times have a good story today about the sanctions given to the Garfield High School sports programs following violations of league eligibility rules in a September 10th football game:

Because of the incident, athletic director Jim Valiere was placed on administrative leave and he was asked to give back his school keys.

“My reaction is sadness and confusion,” Valiere said, who believes he’s been fired.

As part of KingCo Conference sanctions imposed Monday, Garfield will not be eligible for the football postseason this year and in 2011. In addition, the school forfeited its 24-22 win over Sammamish.

All of the school’s teams are on probation until Sept. 1, 2012, but will be eligible for the postseason.

When asked about the severity of the punishment, Garfield principal Ted Howard said, “It may seem harsh, but I can’t really elaborate on some of the other things that were going on behind the scenes. For it to get to that extreme, there were definitely some other things going on.”

Allen and Kelley said they felt they would have been fired if they hadn’t stepped down.

“There was some really hard thought taken into consideration, knowing how much Anthony Allen means to Garfield and the alumni here,” Howard said. “He’s a phenomenal coach … I hired him. It was something that wasn’t taken lightly.”

The article says that the issues came up due to failures in a system of academic probation periods, but communication breakdowns led to ineligible players participation in the September game. Read the whole story at The Seattle Times.