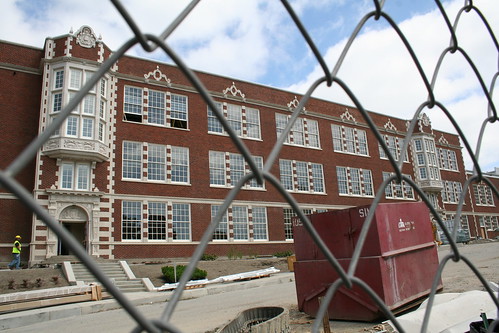 Danny Westneat at the Seattle Times has a really good column this week about Garfield’s record high attendance now that everyone in its district has been allowed to go there under the new neighborhood school system:

So many kids were assigned to the school (300 more than capacity), and so many of those have shown up, that some students have been without full class schedules while officials scramble for extra teachers and space for all the bodies.

“My son has been going for the first period and hanging around with his friends, not really doing much,” says Stephanie Bower, a mom of two at Garfield. “There wasn’t a class for him to take.”

“We were told to sleep in, to do a late start at nine instead of eight because there wasn’t room,” says a parent of a freshman.

“They simply weren’t prepared to take this influx of kids,” says Polly Davis, mom of a sophomore.

Everyone who called me — a half-dozen families — credited the principal, teachers and counselors with working overtime to accommodate a record wave of kids. The freshman class at Garfield is a whopping 547 students (and growing). That’s 23 percent more than last year, and the largest freshman class in decades.

The story goes on to quote school spokesperson Teresa Wippel who says that four new teachers have been hired and added to the faculty to handle the crush of students. But principal Ted Howards says that they’ll still have to get “very creative” to make sure they have room for all students to carry a full load of classes.