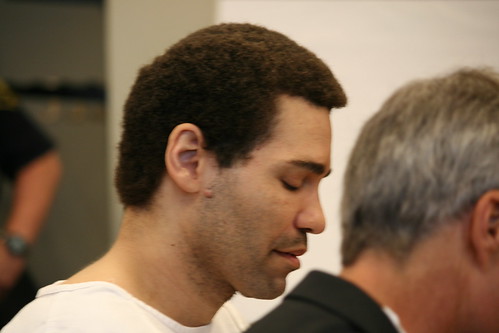 In recent years King County Prosecutors have passed up the death penalty in several high profile cases where it was applicable, with the Green River Killer being one of the most notable.

But that pattern ended today, with prosecutors announcing in a court hearing that they would be seeking the death penalty against Christopher Monfort, accused in the murder of Officer Tim Brenton last Halloween.

The prosecutor’s office conducted a review to determine whether there were any factors that would justify life in prison instead of the death penalty, but in their notice presented at court they said that “there are not sufficient mitigating circumstances to merit leniency.”

In a statement released to media, King County Prosecutor Dan Satterberg said that the premeditated slaying of a police officer called for full punishment under the law. “The magnitude of the crimes with which the defendant is charged, and the absence of significant mitigating factors, convinced me that we should submit this case to the jury with the full range of applicable punishments, including the possibility of the death penalty.”

Monfort’s lawyers released a written statement that claimed the state is moving too quickly and that they believe the prosecutor moved ahead without a full review of information that would argue against the death penalty. “We are saddened by the fact that the prosecutor has chosen note to provide us with adequate time to investigate and present that evidence before making this life and death decision.”

The death penalty decision has been repeatedly delayed to give both sides time to present and consider evidence related to the death penalty decision. However, in that time the defense team was not able to present a mitigation package that would detail their reasons for leniency. Their request for a further delay was denied at a hearing last week.

Monfort is permanently confined to a wheelchair and suffers from paralysis of part of his face due to wounds incurred when he was shot by officers at the time of his arrest. He maintained a defiant attitude in today’s hearing, at one point yelling out “We can not be upstanding citizens unless we’re willing to stand up.”

0 thoughts on “Prosecutors to seek death penalty against Christopher Monfort”