It’s a big day in the Central District and across the rest of Seattle as kids start the first day of classes in the 2010/2011 school year. And many of those kids will be blazing new trails at schools that they were assigned to attend based on where they live.

This is the first year of the school district’s controversial new student assignment system, which does away with thirty years of school choice that allowed students to attend schools all across the city.

As we reported last fall, 23rd & Cherry is the dividing line between four different elementary schools: 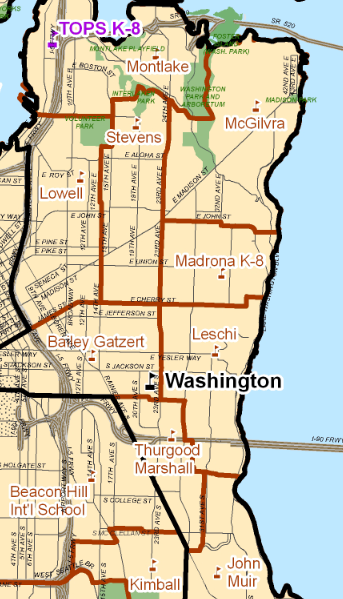 Additionally, students on the north, south, and far west ends of the neighborhood are assigned to three additional schools:

Be sure to watch out for kids out on the streets as some of them will be making long walks to their new schools.

It’s also a big day in Madrona as Principal Farah Thaxton takes over at Madrona K-8 after Kaaren Andrews was reassigned to the Interagency Academy in a move that drew parent and student protests when first announced early this year.