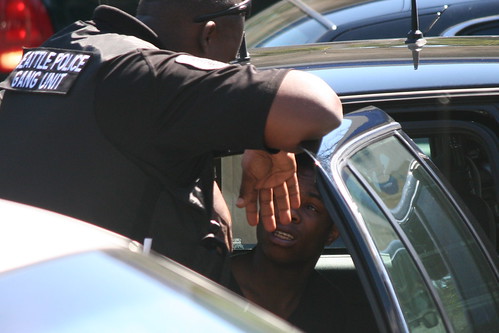 A second suspect has been charged in the robbery of the Union Market at 21st & Union last Sunday.

Prosecutors say that Bobby Joe Credit teamed up with David William Groce in the gun-involved hold-up, keeping watch at the front door while Groce went in and stole cash from the store clerk. After the robbery, Credit is alleged to have entered the store and tried to keep the victim from being able to call 911 to report the robbery.

According to charging documents, store security cameras caught the two walking westbound on Union in front of the store. They stopped briefly across the street, and then walked back to the store entrance:

Credit actively kept watch from outside the front door, walking in front of the door and looking around. While he did so, Groce robbed the store by pulling a black pistol from his waistband and jumping onto and over the counter and grabbing [the victim], the female store owner, who was near the cash register. Groce held the pisol to [the victim’s] head and demanded that she open the cash register. Groce removed the $1 bills and $bills from the till. He told [the victim] that he needed more money and to move the cash tray. [The victim] moved the tray and Groce removed the $20 bills. According to the victim, Groce took between $120 and $150 from the register. Groce jumped back over the counter and ran from the store. He ran to the right as he left, which is where Credit was seen to have last walked.

Credit walked into the store from the right of the door and looked behind the counter. He walked over and met [the victim] as she was walking from behind the counter. He interfered with her making a call to 911 by asking her questions and talking loudly as if to distract her. She repeatedly told him to be quiet and leave her along, but he stayed near her and continued to ask her questions. She went back inside and Credit followed her continuing to talk to her, apparently in an effort to hamper her efforts to make phone calls. He tried to buy something. She told him to leave the store. He eventually left.

Police say that the video proves that the two were working together. They showed to the video to gang detectives who “immediately positively identified” Credit, and he was arrested Wednesday in the parking lot of the AM/PM at 23rd & Cherry.

Bobby Joe Credit is a familiar name to CDNews, as it’s one that we’ve often heard on the scanner in relation to burglary activity. He has a previous arrest in February of this year for trespassing and residential burglary. In addition, at this week’s EPCPC meeting, Captain Jim Dermody said that Credit was on the departments “top 10” list of burglary suspects, and that his previous convictions should get him serious time if he is convicted.