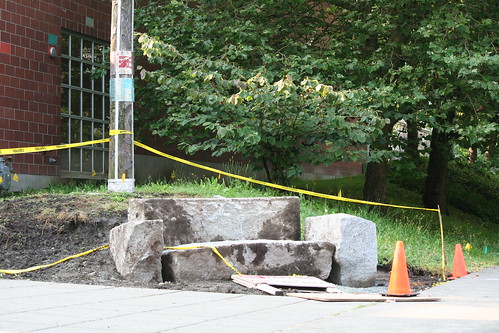 Sometimes it’s the small stories that are the toughest to track down. And we have completely failed at this one.

Last week we saw city construction crews installing this large new stone bench at the corner of 23rd & Cherry, in front of the Garfield Community Center.

A member of the Parks Department communications office did a lot of digging for us, and determined that it was a project of the private Seattle Parks Foundation. But that lead came up empty as well, with the Parks Foundation project manager telling us that it’s not one of theirs and very different from the two standard bench designs that the Foundation installs around the city.

Finally we tried the friendly staff inside the community center, who were equally perplexed. They told us “It just showed up one day” but had no idea where it came from.

So we’ll open it up to the power of the CDNews audience: Anyone know anything about this bench?