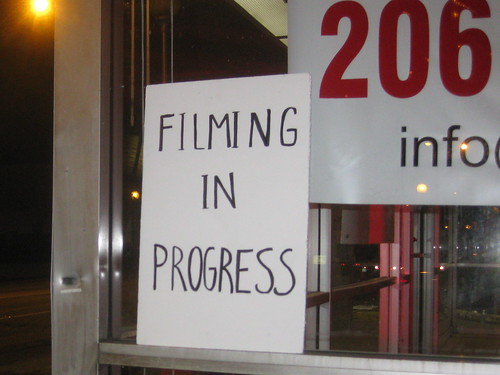 Yesterday we spoke to Rafael Flores, the director of the new movie we caught filming at 23rd & Union on Saturday night. A graduate student at San Francisco State University, Flores is producing the film as part of his thesis on how gentrification affects communities of color and other marginalized populations.

Flores describes the movie as a docu-drama that weaves in interviews with a story and characters based on the murder of Degene Dashasa in his restaurant in 2008. The director was friends with Dashasa and shares mutual acquaintances with convicted murderer Rey Davis-Bell. He’s completed interviews with a wide range of people familiar with each man to help lay out the chain of events that led to the shooting.

The movie is using the story of that murder as a vehicle to talk about the larger story of gentrification in the Central District, and tension between the African American community and more recent arrivals such as Ethiopian immigrants and gays on Capitol Hill. According to Flores’ thesis, forces of gentrification follow a recognizable pattern that often results in violence as communities are marginalized and pushed out of their homes.

Keep an eye out and you might catch movie making in progress around the neighborhood through this week. Monday was the 5th day of filming for the movie, with 3 more days to go.

No release date is available yet, but check back on Flores’ website at http://www.greeneyedmedia.com for updates.

0 thoughts on “"Divide and Conquer" movie looks at gentrification, murder”