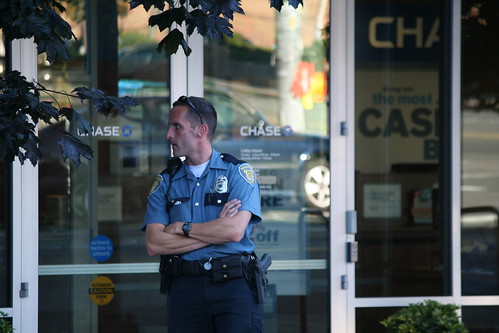 The police department has released the full report on the Tuesday evening bank robbery at the 23rd & Jackson Chase bank branch.

According to the report, the suspect walked in and passed a note to a teller that said “Put the money in the bag. Don’t ask questions. No dye packs. This is not a joke.” The suspect then passed the teller a black reusable grocery bag and the teller filled it with $2,123 in cash from her top drawer.

No gun was seen or implied, and the crime is classified as a “body force” robbery.

One witness outside saw the suspect run southbound down the middle of 23rd before turning and heading southeast through the Colman neighborhood. A search by police and a K9 unit failed to find the suspect.

Detectives took away video surveillance footage from the bank’s cameras, and will also be reviewing video from a police cruiser that was in the area at the time of the robbery.

We also spoke to an FBI spokesperson who said that no arrest has been made yet. But they do have an active investigation and will release more information soon.

Update: The FBI just let us know that they’ve made an arrest in the case. The suspect was already in jail on a Department of Corrections warrant, and will now also be charged with bank robbery.