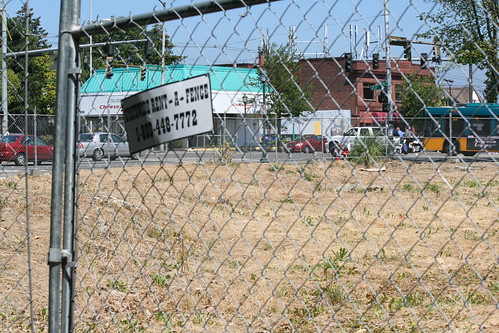 We’ve been working to get an update on removal of the art installation at 23rd & Union, which was first reported here by project organizer Jenny Arsarnow earlier in the week.

The artwork was completely removed by Tuesday morning, leaving only a brown empty lot surrounded by chainlink fences. But the questions and comments from the community have continued to grow in the original story.

According to Sean Whitcomb, spokesperson at SPD, an East Precinct officer heard concerns from numerous citizens about a single photo in the art installation, taking issue with the alleged criminal activity of the person portrayed there. The complaints centered around only the presence of that one photo, and not the installation as a whole.

That officer sent emails to the organizers of The Corner project and property owner Jim Mueller, relaying those citizen concerns. According to Whitcomb “this was not a police issue. Not police related at all. It was a uniformed officer who is a very visible form of government, who was asked ‘can you do anything about this? Can you pass this along?'”

Due to personal information contained in the emails, SPD couldn’t release the full thread of communication on the subject outside of a formal Public Disclosure Request, which can take weeks. However, Whitcomb quoted one line of the opening email which read:

They are asking me to ask you to please take down his picture. They don’t consider him their protector, but instead one of the problems.

Although many may know which person and photo was the subject of the controversy, we don’t think it’s fair to name him specifically regarding anonymous reports, and we ask that commenters refrain from doing so either.

We also asked SPD for comment on allegations that the officer contacted Mueller’s lenders when action wasn’t quickly taken on the request. Whitcomb said he has asked for confirmation on that from East Precinct Captain Jim Dermody, but has not yet heard back.

We’ve left calls with both Mueller and Asarnow today and are waiting to hear back on their side of the story, including a report from a reader that the project organizers are considering legal action against the city.

SPD’s Whitcomb stressed that they appreciated the role that the artists and their work did in the community, saying “we’ve got a lot of respect for Jenny Asarnow, and for the work she’s done in that community and appreciate the time she took to make that project a reality.”

0 thoughts on “The Corner Update: SPD says they just passed along request”