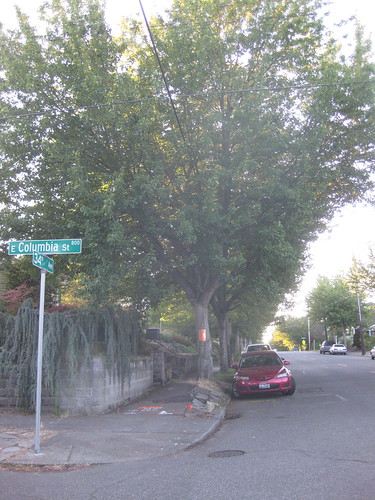 The good news is that the 800 block of 34th will soon get a new, level, uncracked sidewalk.

The bad news, from at least one neighbor’s perspective, is that the project will require the termination of a red maple on the corner of 34th & Columbia.

We noticed the bright orange city sign on the tree during a walk on Saturday night, and asked a nearby neighbor how he felt about it. “Not too good” was his response, and he added that he had complained to the city but was told that it wouldn’t be possible to prune the tree’s roots and restore the sidewalk without killing the tree.

Today we spoke to Shane DeWald in the city arborist’s office, who said that they’ve received a few calls on the tree’s potential removal. The sidewalk there has been identified by the city’s street maintenance office as being in unusually bad shape and brought in the arborist to evaluate whether the tree could be saved.

The health of the tree isn’t an issue, according to DeWald. “The tree is in good condition. There’s no reason to remove it if the decision was simple left to us to make a decision about the tree itself.”

DeWald said that the city will be collecting public feedback this week, for a final decision next week about how to proceed. The basic choices are to either go ahead with the sidewalk project and remove the tree, delay the project and look for an alternative, or to cancel the project all together. Any alternative would likely involve using asphalt instead of concrete and “might not be a very nice looking repair.” The public’s response to the loss of the tree will be a major factor in their decision.

Any neighbors with an opinion are encouraged to email [email protected] or call the arborist at 206-684-8733. Make sure your comment references the tree’s location at 34th & Columbia.