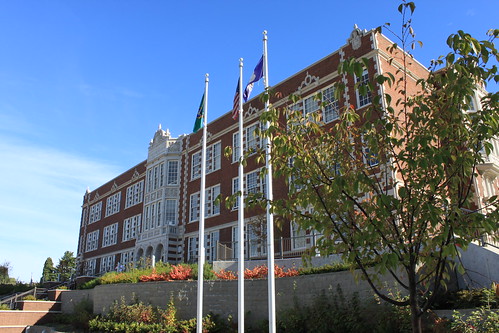 Our news partners at The Seattle Times have the scoop:

A former teacher at Seattle’s Garfield High School has been accused of having sex with a 17-year-old student.

King County prosecutors say they plan to charge Taryn Fairbanks, 33, with first-degree sexual misconduct with a minor on Tuesday. On Monday, Seattle Public Schools mailed a letter about the incident to families of the nearly 1,800 students who attend Garfield. Fairbanks, who resigned less than a month ago, was named in the letter.

A school district spokeswoman said that Fairbanks taught language arts and advised the school newspaper. Previously, she taught in the Kent and Renton school districts.

The story goes on to state that school officials learned that rumors of the teacher’s activity was “widespread among students at Garfield, and even among students at other schools”, and that when questioned the the suspect blamed “an issue with alcohol.”

Any students with further information or who may have also been victimized are being encouraged to contact the police.

Read the whole story at http://seattletimes.nwsource.com/html/localnews/2012345341_g

Update: More on the case from SeattleCrime.com, who has found that she taught Language Arts and was advisor to the school newspaper:

The party was on its way when the B.J. recipient, named A.B. in the documents, got a text message from Fairbanks asking what he was doing. Knowing that she had attended student parties in the past and thinking it would be funny if a teacher showed up to his, he invited her to attend. When she arrived, she kept beckoning him via text message to join her in another part of the house. A.B.’s friends encouraged him to do it, so he went to her and she led him into a basement guest room and shut the door. She then performed oral sex on him.